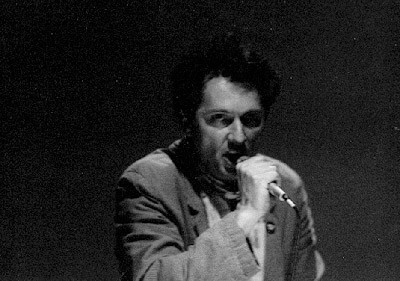 Eutectic – composed in real-time with the Evolution Generator – an invented device for acoustic phenomena, sound machines and machinations. Quebec artist Arcand on-the-spot processing plays with structuring procedures as short, shifting loops overlap and intertwine in a constantly renewed continuum of concrete vocal and instrumental sounds which spatialize and elongate the listening room to accelerate the exponential development.

Pierre-André Arcand is active in many forms of contemporary art, from sound poetry and sound art to visual art and digital video. He is best-known for his macchina ricordi, an accretionary (i.e. loop-based) recording device, and his sounding book. He is a member of the sound art collective Avatar and has released albums on its affiliated label Ohm Editions. In the early 2000s, he ported the macchina ricordi to the digital age. The numeric macchina ricordi explored similar looping possibilities on the computer and soon integrated video manipulation, resulting in the release of the audio/video two-CD set Transfuge + Transfuge A/V in 2002. —Bio as of 2019