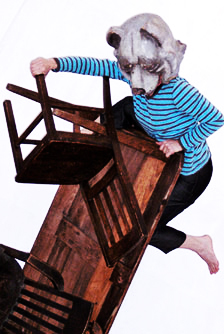 Pooh Kaye Pooh Kaye’s exuberant films and dances were a vital part of downtown New York’s experimental art movement. Her company, Eccentric Motions, has performed at New York’s MOMA, Lincoln Center, The Kitchen and The Joyce Theater and nationally at the American Dance Festival and Jacob’s Pillow in Lee, Massachusetts. The stop” motion films have been seen at the Metropolitan Museum, The Whitney Museum and The National Gallery. She has taught at Bennington College and The Museum of Fine Arts in Boston and is the recipient of a John Simon Guggenheim and six NEA Fellowships. Ms. Kaye is currently a 2010 recipient of a Dance Media production grant awarded by EMPAC and funded by the Jaffe Foundation.

Michael Suchorsky has spent decades performing and recording around the world playing drums in a wide variety of musical genres; from middle eastern jazz, to microtonal, to punk rock. Michael Suchorsky has played in venues that stretch from CBGBS to the Berlin and Montreaux Jazz Festivals to Lincoln Center. He has long standing associations touring and recording with artists such as Lou Reed, Soldier String Quartet, jazz trumpeter Don Cherry, and French rock legend Jacques Higelin. He has also composed music for TV, and a variety of bands including his joint collective project the Every Man Band which resulted in a couple albums for ECM.