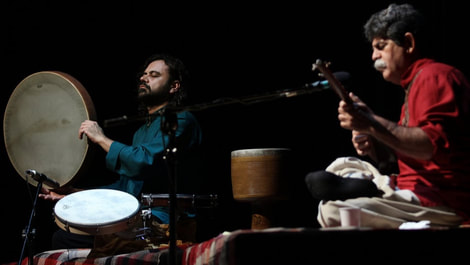 This ecstatic and trance-inducing concert of Kurdish music from western Iran brings together two of Iran’s most renowned musicians:  Ali Akbar Moradi, the extraordinary virtuoso of the tanbour, an ancient 2-stringed long-necked fretted lute traditionally used in religious ceremonies, and Pejman Hadadi, the innovative percussionist (tombak, daf) who has been a member of the Dastan Ensemble for over 20 years and collaborated with countless master musicians in Persian and world traditions. Their program features meditative improvisations based on the repertoire of the Yarsan people – followers of a mystical faith associated with Sufism, and the beauty and complexities of the art of this region. The program marks a rare NY appearance for Moradi and Hadadi.

“Love, spirituality, intoxication with the divine and the power of music… With one string providing a drone, everything else rides on a single string of the tanbour, and in Mr. Moradi’s hands, that string encompasses an expressive universe.” – New York Times

Presented as part of Robert Browning Associates’ A World in Trance Festival.
A World in Trance, now in its sixth edition, has been host to some of the world’s most captivating music, bringing people together in search of enlightenment and spirituality.