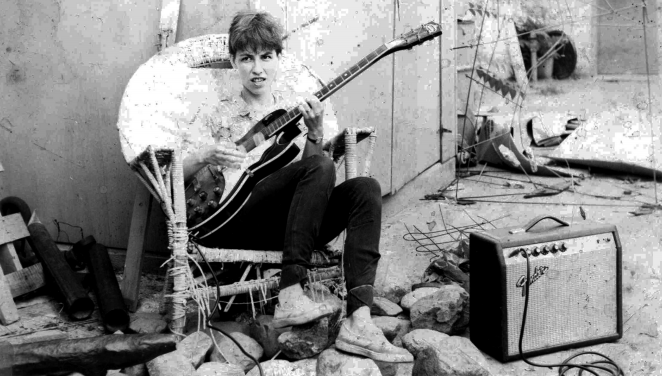 Rebby Sharp, from the woods of Virginia, slinks together some raw solo hack avant-garde songs infused with traditional Appalachian strains. The evening culminates in a trio of fiddle, guitar, and banjo providing irascible mirth and shockproof substance.

Some history: The members of IDIO-SAVANT, Danny Finney (sax,v), Paul Watson (tr,gtr,v), and Pippin Barnett (dr,v), were interested in expanding beyond pure free-improvisation, into more beat driven song forms, with lyrics and collaborative composition, so, when Rebby Sharp (gtr,v) and Phil Trumbo (b,v) joined them for a few “jamming” sessions in late 1979, a mutual, reciprocal enjoyment led to the formation of ORTHOTONICS. In 1989 after the band split up, Sharp and Finney reunited in the alternative rock group, RATTLEMOUTH. Sharp also released a solo album, “In One Mouth and Out the Other” in 1989, on which Fred Frith performed.