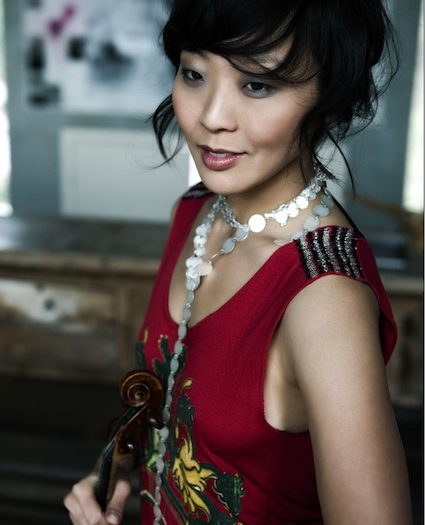 In an evening dedicated to contemporary string works, Jennifer Choi (violin) teams up with Pala Garcia (violin) and Michael Nicolas (cello) to perform an ethereal and poignant set of solos and duos by some of today’s most important European composers:

Hailed by Time Out New York as “passionate,” and “one of New York’s most reliably adventurous performers,” violinist Jennifer Choi has charted a career that breaks through the conventional boundaries of solo violin, chamber music, and the art of creative improvisation. She is regularly sighted in performances of works that stretch the limits of violin playing with extended techniques, improvisation, and the use of electronics. She has premiered numerous solo and chamber works by John Zorn including Goetia, Le Momo, and Amour Fou, as well as the world premieres of Wadada Leo Smith’s Afrikana 2 Concerto for Violin and Silver Orchestra, Randall Woolf’s Holding Fast for Violin and Video, and Daniel Felsenfeld’s Bad Coffee Serenade for violin and chamber orchestra. She can be heard on over a dozen albums for TZADIK record label in compositions by John Zorn, Elliott Sharp, Wadada Leo Smith, and the Susie Ibarra Trio. A prominent chamber musician, Jennifer was a former violinist of the Miró String Quartet and ETHEL and currently performs regularly with the Either Or Enemble.

Violinist Pala Garcia, a San Francisco native, completed BM and MM degrees at the Juilliard School and an academy fellowship with the Bavarian Radio Symphony Orchestra. A dedicated chamber musician, she is a member of the Toomai String Quintet and the Hindustani ensemble Falu; and has participated in festivals such as Open Chamber Music at Prussia Cove, Aspen, Mecklenburg-Vorpommern, Holland Music Sessions, Saito Kinen, Sarasota, and others. Ms. Garcia is active in new music and has worked with composers G.F. Haas and Heinz Holliger at the Lucerne and Ensemble Modern academies, and has performed with numerous NY-based new music ensembles.

Cellist Michael Nicolas is one of the rising stars of his generation and a dynamic performer on the classical and contemporary music scene, in demand as a soloist, chamber musician, and recording artist. Michael is a frequent guest at music festivals such as Bridgehampton, Marlboro, Ravinia, and Chamber Music Northwest. From 2007-2010, he lived in Montreal, Quebec, where he held a position as Associate Principal Cellist of the Montreal Symphony Orchestra. Michael is currently a member of the International Contemporary Ensemble (ICE), and has worked with many distinguished composers such as the late Milton Babbitt and Elliott Carter; Mario Davidovsky, Steve Reich, Joan Tower, Charles Wuorinen, and John Zorn. Michael is also a member of Ensemble Ditto, a chamber music initiative based in South Korea that has garnered extraordinary success in reaching new and more diverse classical music audiences.