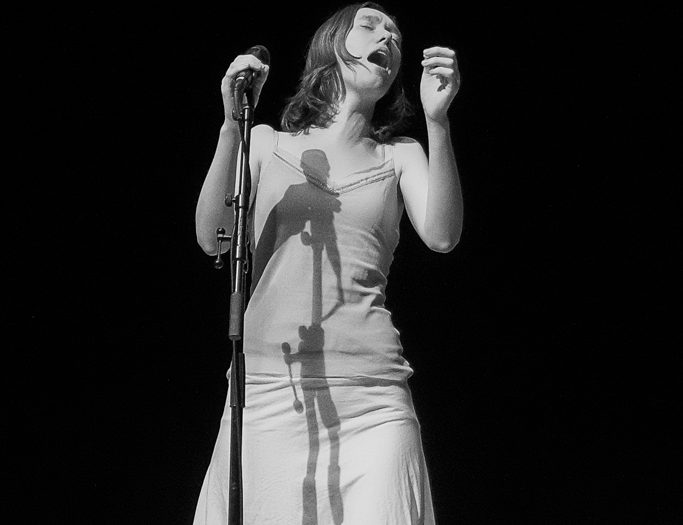 The first performance of improvised music by a new trio made up of Gelsey Bell (voice), Miguel Frasconi (glass and electronics), and Cleek Schrey (hardanger fiddle).

Having performed extensively with both Frasconi and Schrey, Bell felt their musical worlds and instincts were crying out for one another and put together this new trio as part of her [RESIDENCY] this season.

The evening will also include new vocal works by Bell and the first concert performance of Bell and Schrey’s “Locker Room Duet,” which was considered a standout by both Time Out New York and the Whitehot Magazine at the 2013 LUMEN Festival.

Gelsey Bell is a singer, songwriter, and scholar. She has been described by the New York Times as a “winning soprano” whose performance of her own music is “virtuosic” and “glorious noise.” She has released multiple albums and her work has been presented internationally. She is a core member of thingNY and Varispeed. She has also worked with numerous composers, choreographers, and performance creators including Robert Ashley, Matthew Barney and Jonathan Bepler, Kimberly Bartosik, Ne(x)tworks, Dave Malloy, Rachel Chavkin, John King, Chris Cochrane and Fast Forward, Gregory Whitehead, Kate Soper, and Rick Burkhardt, among others. She has a PhD from NYU in Performance Studies and is the Critical Acts Co-editor for TDR/The Drama Review and the reviews editor for the Journal of Interdisciplinary Voice Studies. www.gelseybell.com

Gelsey Bell “squints her eyes, opens her mouth as wide as a Francis Bacon cardinal and lets out a virtuosic, slowly mounting sound that is part rasp, part scream, part nails dragging down a chalkboard. It’s a glorious noise, especially because it seems to come upon Ms. Bell unaware, inserting itself like an unruly guest into a voice that is otherwise sweet and folksy. But that’s the point: You hear the screech, and you think harder about the smoothly sweet parts than you otherwise might.”

Miguel Frasconi is a composer and improvisor specializing in the relationship between acoustic objects and musical form. His instrumentarium includes whole & broken glass, electronics, laptop, and constructions of his own design. Miguel’s compositions include chamber music, opera, film, dance, and his array of activities have included collaborations with Balinese composers, operatic vocalists, Tibetan musicians, and laptop virtuosi. Miguel’s music has been released on New Albion Records, Porter Records, Clang, and a recording of his string quartets will soon be out on Tzadik. Every Thursday this year Miguel adds a new piece from his archives, 1976-2006, to his #audioTBT playlist at souncloud.com/frasconimusic.

Described by the Irish Times as “a musician utterly at one with his instrument and his music“, Cleek Schrey is a fiddler and composer from Virginia. An active member of traditional music communities in America and Ireland, he plays in the Ghost Trio with Ivan Goff and singer Iarla Ó Lionáird. He regularly makes music for dance, having worked with choreographers Douglas Dunn and Bill T. Jones and percussive dancers Sandy Silva and Nic Gareiss. The journal Sound Post has noted that Cleek “possesses a rare combination of traits: deep respect for traditional music and the people who make it, and an unbounded curiosity about new directions for sound.” He is currently pursuing a Masters in Music Composition at Wesleyan University.

New Works by Gelsey Bell and Bell/ Frasconi/ Schrey Trio is made possible, in part, by the Jerome Foundation. This is the first presentation of three concerts as part of Bell’s Artist Residency.

Over the last 33 years the Jerome Foundation has awarded Roulette almost $1 million, supporting hundreds of emerging artists through Roulette commissions, residencies and presentations. This sustained support has helped Roulette welcome successive generations of experimental artists into our community and onto our stage.