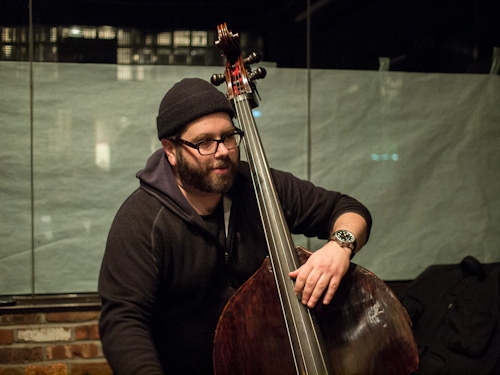 Reuben Radding is a bassist, free improviser, teacher, and recording engineer based in Brooklyn, NY. He was born in Washington DC in 1966, where he first began performing as a member of the legendary DC punk scene. After relocating to New York City in 1988 he studied the double bass with Mark Dresser and quickly became a busy stalwart of the so-called “Downtown” scene, performing with many of the most prominent new Jazz musicians of the time, including John Zorn, Elliott Sharp, Anthony Coleman, Andrea Parkins, Dave Douglas, and Marc Ribot.

Reuben Radding has taught masterclasses on extended bass techniques, and free improvisation workshops at many colleges, universities, high schools, and middle-schools in the the US and at the Banff Center in Canada. He has recieved a number of grants and awards, including a fellowship from Artist
Trust in 2001, and was a resident at Music OMI (Ghent, NY) in 2006 . He has appeared at many major festivals including Victoriaville (Canada), North Sea Jazz Festival (Netherlands), Pori Jazz Festival (Finland), Vienna Jazz Fest (Austria), Kongsberg Jazz Festival (Norway), What Is Jazz? Festival (NYC),
Kasseler Symposium zu Aktueller Musik (Germany), LeWeekend (Scotland), Drooga Goodba (Slovenia), The Vision Festival (NYC), Earshot Jazz Festival (Seattle, WA), the Seattle Improvised Music Festival (Seattle, WA), Improvised and Otherwise (NYC).

Philippa Thompson plays violin, viola, guitar, musical saw, spoons, washboard and sings. She’s learning double bass, but since it doesn’t fit on her bike, she may pick up the harmonica instead. Raised in California, she now lives in Brooklyn and plays regularly with bands Gloria Deluxe, M Shanghai String Band, and the Ukuladies. She has recently performed with Beth Orton, Belle and Sebastian, Anti-Social Music, and Melomane. She also spends time organizing the Bang on a Can Summer Music Festival at MASS MoCA.

Violist Karen Waltuch is a composer, performer and teacher living in Manhattan. She has composed for television and theater as well as for small ensembles of her own. Karen has a lengthy recording history, working for such artists as Wilco, Jim O’Rourke, Beth Orton, and The Walkmen. She is an original performing member of Cynthia Hopkins’ Bessie award-winning Trilogy
musicals. Karen also performs regularly with many collaborators including The Roulette Sisters, Blarvuster, Gloria Deluxe and Tony Conrad.

Alex Waterman is a founding member of the Plus Minus Ensemble, based in Brussels and London, specializing in avant-garde and experimental music. In New York he performs with the Either/Or Ensemble. Alex has worked with musicians such as Richard Barrett, Keith Rowe, Marina Rosenfeld, Anthony Coleman, Elliot Sharp, Ned Rothenberg, Gerry Hemingway, David Watson, Chris Mann, Alison Knowles, Thomas Meadowcroft, and Michael Finnissy. He has performed as guest musician with numerous ensembles, including Trio Event (Berlin), Champs d’Action-Antwerp, Q-O2-Brussels, and Black Jackets Company-Brussels. As a curator he has organized events at Les Bains:Connective in Brussels, OT301 in Amsterdam, Miguel Abreu Gallery and The Kitchen. His project with the Bach Cello Suites has toured in Switzerland, Italy, Holland, and the Opera of Monaco. In 2007 Alex curated two exhibitions in New York, one on experimental music and poetics: AgapÃª (June 2-July 28th, 2007) at Miguel Abreu Gallery; and the other on graphic notation, Between Thought and Sound: Graphic Notation in Contemporary Music (September 7-October 20, 2007) at The Kitchen in Chelsea. Alex is presently working on his PhD in musicology at NYU as well as writing a book about the composer Robert Ashley with the designer and writer Will Holder. Alex is also collaborating and participating in Dexter Sinister’s residency at the Armory for the 2008 Whitney Biennial.