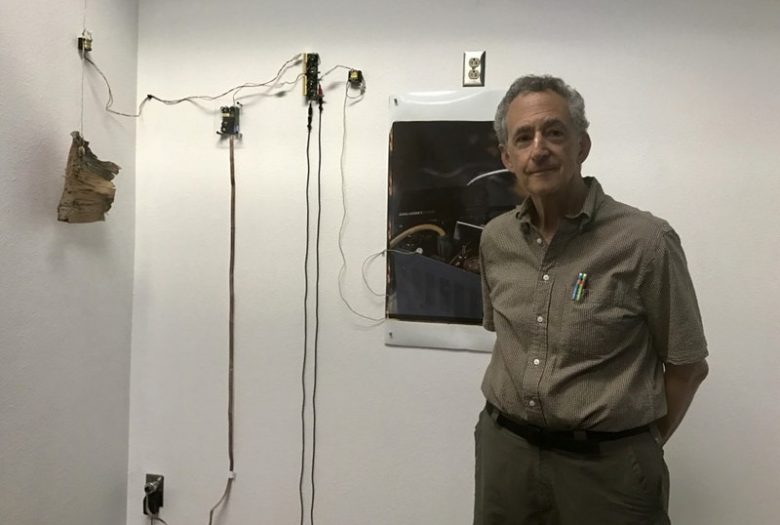 Transducer Series Pieces for 2 DVD’s & Computer (2008)
this piece uses excerpts from my 53 super 8 sound film series
made while traveling in N/S America, Australia, NZ and Indonesia.

Biography
I have created electronic music and interdisciplinary art since the 1960’s offering performances, installations and screenings in N/S America, Asia, Europe, Australia and NZ. For 30 years, I have designed and built functional microphones using piezo disks. They pick up sounds too quiet for our ears, extending our hearing. I use these in my performances/installations and/or to record sound from many sites and locations.

Travelon Gamelon will be performed for the Missoula, Montana Museum of Art this April. Recent installations include Alga-Aqua, in Vigo, Spain and Sao Pedro do Sul, Portugal and Half Lives-Nuclear Waste in Phoenix. Recent collaborative work with Mona Higuchi includes Fences/Borders-USA/Mexico, at the Museum of World Culture, Gothenborg, Sweden and Relocation: Alaska, at the Phoenix Public Library. I recently completed editing Death Valley Cycle, video/audio recordings from each month of the year at this extraordinary location.

I have received fellowships from the Guggenheim Memorial Foundation, the Asian Cultural Council, the Arizona and Massachusetts Arts Councils, the NEA and many others. A 2 CD set of earlier music and audio work, including Travelon Gamelon was on EM Records, Osaka, Japan in 2007.