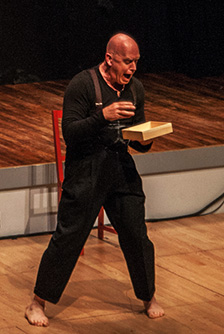 Five Beasts is a set of human portraits, men and women seen as if by an animal, the language a kind of music or noise, the gestures unaccountable. We are, most of us, lost in a forest of our own design, a welter of unconscious narratives, the pull of our complicated past, an obsessive constructor of futures, howling our troubled allegory of self: this is our masquerade-cum-delusion. But the animal informs  and teaches us – if we listen. We are absurd and amazed, and sometimes beautiful, in our utter ignorance.

Performance artist/vocalist Rinde Eckert and composer/performer Ned Rothenberg first worked together over 20 years ago in a production of Power Failure by the Paul Dresher Ensemble and have fantasized about a future collaboration ever since. In October 2012, the chance came at the Walls and Bridges festival, presented at Roulette by Lyon’s Villa Gillet. The response to their Five Beasts was overwhelming, prompting Roulette director Jim Staley to invite Eckert and Rothenberg to expand the piece into an evening length work. Ned and Rinde are joined by beatbox artist Adam Matta in this new version.

Rinde Eckert is a writer, composer, singer, actor, and director whose music, music theater, and dance theater pieces have been performed throughout the United States and abroad. He has received a Guggenheim Fellowship in Music Composition, a Marc Blitzstein Award (from The American Academy of Arts and Letters), an Obie Award (And God Created Great Whales), a Grammy Award (Lonely Motel – Music from Slide), an Alpert Award (2009), and a Doris Duke Performing Artist Award (2012). He was a finalist for the Pulitzer Prize in Drama in 2007 for Orpheus X.

Composer/Performer Ned Rothenberg has been internationally acclaimed for both his solo and ensemble music, presented for the past 30 years in North and South America, Europe and Asia. He performs primarily on the alto saxophone, clarinet , bass clarinet, and the shakuhachi – an endblown Japanese bamboo flute. He leads the trio Sync, with Jerome Harris, guitars and Samir Chatterjee, tabla. Recent recordings include Quintet for Clarinet and Strings, Ryu Nashi (new music for shakuhachi), Inner Diaspora, The Lumina Recordings and Ghost Stories, all on John Zorn’s acclaimed Tzadik label, as well as Live at Roulette with Evan Parker, Are You Be and The Fell Clutch, on Rothenberg’s own Animul label.

Adam Matta is a beatboxer and vocal performance artist from New York City. He has appeared with Bobby McFerrin at Carnegie Hall and featured on The Carolina Chocolate Drops’ Grammy-nominated Leaving Eden, as well as The Hunger Games Soundtrack. Matta headlined 2009 UK Human Beatbox Convention, Joe’s Pub, New Museum for Contemporary Art and Here Arts Center. He has been profiled on PBS, Showtime, CUNY-TV, WNYE and NPR and his music has appeared on “The L Word, Season II: Sessions (Tommy Boy),” and in the documentary, Planet B-Boy. Matta is Artist in Residence at Cornell University, Here Arts Center, Digital Performance Institute and League of Electronic Musical Urban Robots.