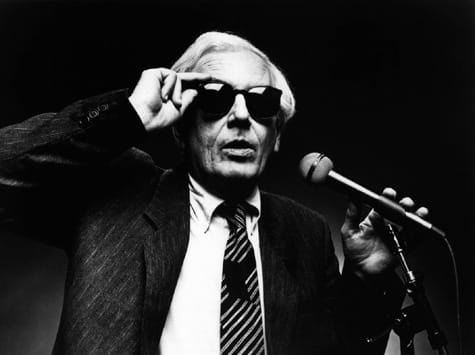 Works for voice and tape by the composer, writer, observer, chronicler, raconteur:

The Immortality Songs: Love is a Good Example / When Famous Last Words Fail You / Yes, But Is It Edible? / Your Money My Life Good-bye (Selections from…)

Robert Ashley (March 28, 1930 – March 3, 2014) was an American contemporary composer, who was best known for his television operas and other theatrical works, many of which incorporate electronics and extended techniques. His works often involve intertwining narratives and take a surreal multidisciplinary approach to sound, theatrics and writing, and have been continuously performed by various interpreters during and after his life, including Automatic Writing (1979) and Perfect Lives(1984). A distinguished figure in American contemporary music, Ashley holds an international reputation for his work in new forms of opera and multi-disciplinary projects. His recorded works are acknowledged classics of language in a musical setting. He pioneered opera-for-television. –Bio as of 2019