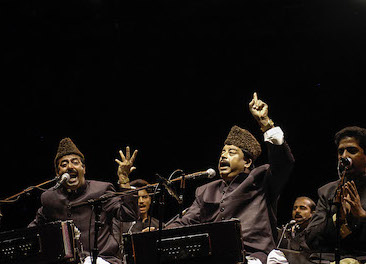 Farid Ayaz, Abu Muhammad & Brothers Qawwal perform qawwali, the ecstatic devotional music of Sufi Muslims made famous in the West by Nusrat Fateh Ali Khan. The 9-member ensemble has gained international recognition for its renditions of both the popular traditional form and the more introspective ancient classical qawwali that is seldom heard today.   Similar to gospel in its use of call-and-response and spiritual fervor, qawwali songs are accompanied by percussive handclapping, harmonium, tabla (drums), and a chorus.  Qawwali (Urdu for “utterance”) songs range from 13th century mystical Persian poems to more recent Punjabi poems that speak of the intoxication of divine love. The qawwali singer or qawwal is regarded as God’s interpreter and devotees sometimes enter into trance. The group sings in many languages, including Urdu, Punjabi, Sindhi, Hindi, Persian, Arabic, Bengali and Purbi.