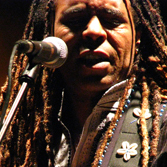 Thursday, April 30: Noura Mint Seymali/Fula Flute Friday, May 1: Farid Ayaz, Abu Muhammad & Brothers Qawwal Saturday, May 2: Hassan Hakmoun Sunday, May 3:  Ned Rothenberg & Glen Velez/Alash, Tuvan Throat Singers This festival will feature music of Guinea, Mauritania, Morocco, Pakistan, Tuva and the US that transcends boundaries and brings the listener to a state of ecstasy and enchantment. Pre-concert talk on Moroccan trance music with Philip Schuyler @ 6:30pm Post-concert Marrakech Dance Party with DJ @ 10pm Born in Marrakech, Hassan Hakmoun is the premier exponent of Moroccan Gnawa trance music in America and a commanding figure in world music circles. While punching out a groove on the sintir, a bass lute, his ecstatic vocals invoke the spirits of healing through chants of praise to the Prophet Mohammad and the saints. His ensemble  provides backup vocals in a call-and-response style and accompanies him on  drums and qaraqeb(metal castanets). The music is a spellbinding blend of North African and Arab melodies with West African rhythms. Accompanists to be announced “Mr. Hakmoun had the charisma of a rock star…rapturous…enthralling” — New York Times