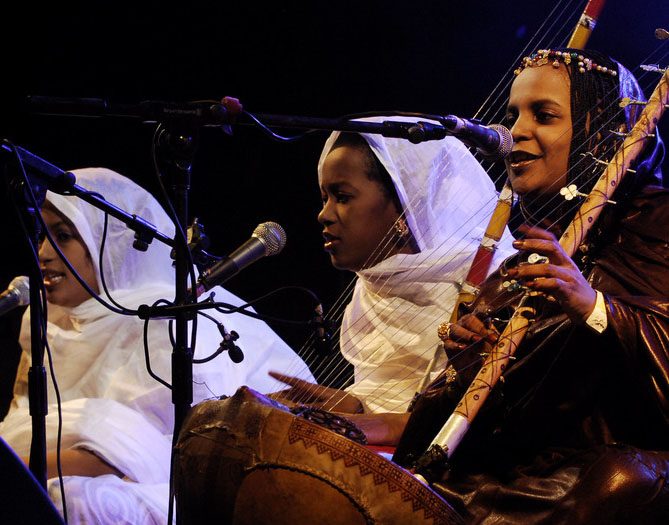 Noura Mint Seymali is heir to a Mauritanian iggawin (griot) lineage stretching back for untold generations. Her stepmother Dimi Mint Abba was one of Mauritania’s most famous musicians and a major figure in bringing Mauritanian music to international audiences. As the daughter of the late Seymali Ould Mouhamed Val, a revered scholar-musician credited as the first person to apply written notation to folk music in Mauritania, Noura is a true tradition bearer maintaining an ancient art and adding her personal signature. Her hypnotic grooves meld traditional Mauritanian instruments, like the ardin (harp) and tidinit (skin-faced lute), within an electrified psychedelic rock band. She is accompanied by her husband, guitarist Jeiche Ould Chighaly; bassist Ousmane Touré;  and Senegalese drummer/producer Matthew Tinari. Her CD Tzenni was recently named one of NPR’s Top 50 Albums of 2014.

“a modernising, transformative force in Mauritanian music” – The Guardian

“an excellent example of roots rocketed into the 21st century.”–Songlines

Bailo Bah is a master of the tambin an endblown three-holed flute used by the Fulani people for various rituals. He grew up in a traditional village in the heart of the Fulani land in the Futa Djalon mountains of Guinea. He was a soloist for twenty-two years with the Ballets Koteba of Abidjan and toured the world with Africa Oye.  Sylvain Leroux was born in Montreal and studied classical flute and jazz. He learned to play the tambin in Guinea and has collaborated for many years with West African musicians and formed Fula Flute with Bailo Bah. He is acknowledged as one of the few Westerners to have mastered this instrument. Together these two musicians perform a hypnotic duet combining voice and flute with a rhythmic intensity that brings to mind the harmonica of of Sonny Terry’s “whooping the Blues”