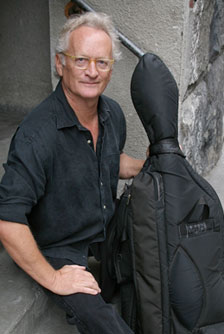 From the Pushkin Theater in St. Petersburg, Russia to a night club in Tokyo, Japan; from the Buddhist caves of Ellora, India, to a theater above the Arctic Circle in Norway composer Robert Een returns to Roulette April 11, 2012. Presenting a chamber version of his opera, “The Escape Artist” program highlights will also include “Subtle Electric Fire” a song cycle of Walt Whitman poems, and the “Tansen Suite” inspired by the Indian singer of the 14th century whose voice it is said could cause spontaneous combustion.  The composer, performing on cello and voice will be joined by giants of the new music scene; Steve Elson – reeds, Bill Ruyle – hammer dulcimer, Toby Newman – voice, and Cliff Hackford – percussion.

Known for his use of extended vocal and cello techniques, Robert Een has recorded sixteen albums of his genre-bending music and has received numerous awards, including an Obie Award and two New York Dance and Performance “Bessie” Awards. His music has been featured in Gregory Colbert’s Nomadic Museum, Noah Baumbach’s film Mr. Jealousy and in scores of downtown dance and theater works, including Dan Hurlin, Yoshiko Chuma, David Dorfman and Ron K. Brown.