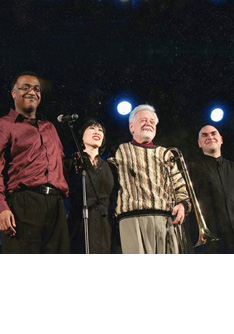 His trailblazing on the trombone has influenced an entire generation of musicians who hear his extroverted gut bucket offerings as the modern incarnation of the New Orleans style. He has equally a passionate lyricism in the tradition of American folk songs and ballads. His jazz operas Blues for Planet Earth and Gold Rush have achieved cult status from their performances in the 1960’s. Rudd has taught at the New England Conservatory of Music, Bard College, University of Maine and in 2000 he was awarded a Guggenheim Fellowship in composition.

“he’s a one-man chorus on this set of his vigorous songs from a deep 40-year songbook … Rudd placed the country’s recent doleful doom-boom in perspective with such original music in uproarious, life- affirming performances … To witness, even overhear, transcendent music such as this may well contribute to cures for what ails us, individually and collectively, short-term or bone-deep.” – All About Jazz