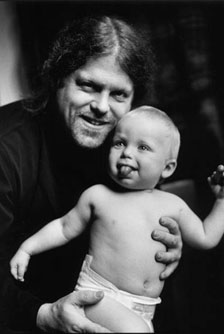 Everyone knows that if you hit a drum you make a sound.  That’s obvious.  But few people are aware of the amazing, often weird, sounds that drums produce by transforming vibrations originating from other sources.  Have you ever played a drum with a dustpan?  Made a drum scream by blowing on it?   Played a drum using slivers of bamboo, faucet parts, or violin bows?   This is your chance to hear (and make!) drum sounds that hardly anyone—including a vast majority of drummers—is even aware of.

After studying with Ed Blackwell and playing with musicians as diverse as Wadada Leo Smith, Dickie Wells, and Brad Mehldau in the 1980s and ‘90s, Andrew Drury has performed internationally and appeared on over 40 cds in ensembles and as a soloist since 2000.  As an educator he has led over 1,000 workshops with schools, prisons, homeless shelters, Indian reservations, a conservatory in Sarajevo, a bookstore in Zagreb, a mountainside village in Guatemala, villages on a volcanic island in Nicaragua, and graduate students at the Columbia University School of Social Work.

“I’m not sure there is a more interesting and diverse renaissance-styled individual whose sensibility has as much to do with the street as it does the classic confines of jazz. Get his CD, get your kids to his workshops, and keep an eye out for his next appearance… He is a superb drummer and composer, but that is just the beginning.”
Chris Lunn, Victory Review