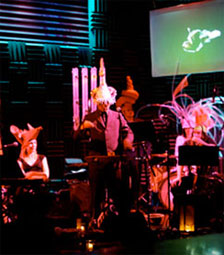 To celebrate some of the most bizarre animals on the planet (as well as some of the most bizarre musical instruments), Michael Hearst has devised Song For Unusual Creatures. Together with his five-piece band (dressed in unusual animal costumes), the group performs instrumental songs inspired by such beastly oddities as the aye-aye, the magnapinna squid, the bobfish, the elephant shrew, the blue-footed booby, and many more. Instruments include daxophone, theremin, claviola, stylophone, trombonophone, and more. Fun for the whole family!

Michael Hearst is a composer, multi-instrumentalist, and writer. He is a founding member of the band One Ring Zero, which has released nine albums. Michael’s solo works include the albums Songs For Ice Cream Trucks and the forthcoming Songs For Unusual Creatures, the website Songs For Newsworthy News, and the soundtracks for the movies The House Of Suh and The Good Mother. As a writer, Michael’s work has appeared in such journals as McSweeney’s, The Lifted Brow, and Post Road. Hearst has performed and given lectures and workshops at universities, museums, and cultural centers around the world. He has toured with The Magnetic Fields, performed with The Kronos Quartet at Carnegie Hall, and has appeared on such shows as NPR’s Fresh Air, A+E’s Breakfast With The Arts, and NBC’s The Today Show.