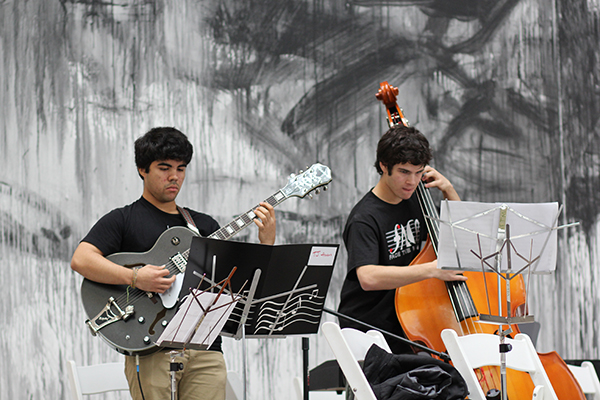 DUE TO INCLEMENT WEATHER THIS PERFORMANCE IS CANCELLED

Face the Music performs Michael Gordon’s 60-minute hypno-thriller, TRANCE. Written for and premiered by London’s Icebreaker ensemble in 1996, this rarely-played piece is being performed by a youth ensemble for the first time! This is Face the Music’s second performance of Trance this season, with the finale being performed at Atlas Arts Center in Washington DC on February 21, 2015.

Face the Music is America’s only ensemble for teenagers that creates and performs classical music by living composers. Called a “Force in the new music world” by The New York Times, Face the Music has grown, in eight years, from an after-school club of eight kids to a massive group of over 190 students from all over the tri-state area who convene every Sunday to practice and perform together. Under the direction of Dr. Jenny Undercofler, Face the Music performs between 35 to 45 concerts each season in venues around the city ranging from schools, to museums, to concert halls. Highlights from recent seasons include performances on the Bang On A Can Marathon, Ecstatic Music Festival, and the River to River Festival, opening for the Philip Glass Ensemble. Face the Music has collaborated with many professional artists, including most recently, the JACK Quartet, with whom they performed Steve Reich’s Triple Quartet at the Baryshnikov Arts Center. Face the Music has been broadcast multiple times on WNYC and WQXR and has been featured on All Things Considered. In 2011, Face the Music was honored with the ASCAP Aaron Copland Award.