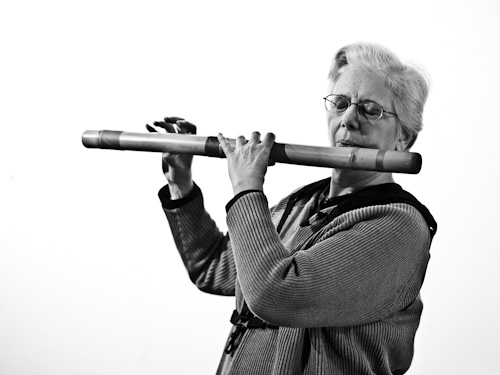 In Chakra Tuning, Rozanne Levine brings her love of improvisational spontaneity and organic, subtly shifting sounds to the fore. Sonic conversations emerge and develop as the group explores textures, sonorities and space. The “hauntingly beautiful” music of Chakra Tuning weaves in and out of melodies, exploring rhythms, moods and inner space in a transforming, unfolding journey. Ms. Levine performs on alto clarinet, clarinet and bamboo flute, and her long-time band mate Mark Whitecage joins her on clarinet, soprano saxophone and electronics. Adding their totally original voices to Chakra Tuning are clarinetist Perry Robinson and violinist/vocalist Rosi Hertlein. Rozanne Levine’s compositions form the thematic material from which the musicians improvise. Electronic manipulation plays a part in the group sound, as do bird whistles, ocarinas, half horns and percussion. Chakra Tuning recorded their debut CD in January/April 2008 and plan to release it soon.

All the members of Chakra Tuning are acclaimed composers and bandleaders. Clarinetist/composer/improviser Rozanne Levine has worked with dancers, poets, actors, vocalists, and sound sculptors, in bands large and small, and with some of the most creative musicians on both coasts, including Anthony Braxton, William Parker, Jason Kao Hwang, Nick Mathis, The New Reed Quartet, The Bi-Coastal Orchestra, Robert (Mike) Mahaffay, and the Improvisors Collective Orchestra, among others. She was a founding member of William and Patricia Nicholson Parker’s Improvisors Collective, and performed on Whitecage’s sound sculptures in the Glass House Ensemble. She is also a noted photographer and received a commission grant from Philadelphia’s Painted Bride Art Center for both her music and photographs. Mark Whitecage is internationally known as an innovative instrumentalist and composer in the fields of jazz and new music. He has performed internationally and recorded with some of the leading artists of our time, including Jeanne Lee, Anthony Braxton, Jacques Coursil, The Nu Band, Lane / Grassi / Whitecage, Gunter Hampel, Mario Pavone, Joe McPhee, William Parker, Marshall Allen and Steve Swell. Perry Robinson is the sui generis master of the clarinet in jazz, folk and avant-garde music who has worked with everyone from Dave Brubeck and Bill Dixon to Pete Seeger, George Clinton, Badal Roy and Anthony Braxton; and Rosi Hertlein is a breathtaking improviser on both violin and voice who has performed and recorded with Cecil Taylor, Pauline Oliveros, Joe McPhee, Joe Giardullo, Ivo Perelman, Wendy Osserman Dance Company, and Howard Johnson, to name a few.

“a surprising and wonderful evening of music…In the past, groups of this size and style have tended towards explosive outbursts like a battery of cannons. This group can certainly explode and erupt…Still”¦ words like bright, clever and meditative seem more apt for description. The…audience that gathered to witness this event…appeared completely entranced.”