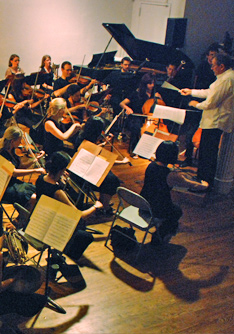 The evening showcases the pianist Joseph Kubera in Cage’s epic solos, Music of Changes and Concert for Piano and Orchestra, with Ostravská banda. Other soloists include Kotik in his flute solos from There is Singularly Nothing, Conrad Harris in Cage’s amazing and nearly impossible to perform Freeman Etudes, and Roscoe Mitchell, premiering Red Flower On A Bamboo Pole on soprano saxophone.

S.E.M. Ensemble has established itself as one of the distinguished ensembles for new music in the U.S., maintaining a continuous schedule of concerts in New York, touring annually in Europe and also performing in South America and Japan. New York Times has hailed SEM, “S.E.M. Ensemble represents the best of what is left of the experimental tradition.”

Co-presented by Interpretations Series and Roulette.

This concert is presented as part of BEYOND CAGE, a festival focusing on John Cage’s legacy in the music of our times, and running in New York City, October 22-November 7, 2012. For more information, visit: www.semensemble.org