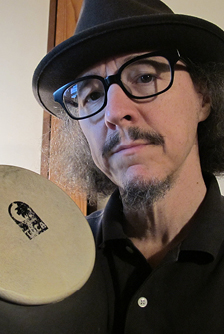 Drummer, singer and songwriter Samm Bennett returns to Roulette for a rare visit to New York from Tokyo to join forces with his old comrade-in-arms, saxophonist Ned Rothenberg (they worked together with guitarist Elliott Sharp in the 1980s as Semantics, among other collaborations) and bassist and rhythm-meister extraordinaire, Stomu Takeishi, in a chunky, groove-infused trio. Employing elastic and sinewy New Orleans-esque funk as a root underpinning, The BRT will explore some collective improvisation as well as a few tunes in an evening of sonic explorations that is sure to please those who like their music churning and slow-burning. The BRT’s special guest will be the always-amazing vocalist Shelley Hirsch, who has worked previously with both Ned and Samm in the band Odd Job, as well as in other projects.

Don’t miss the chance to hear these old friends and compatriots in a vital, up-to-the-minute collaboration that may not happen again for another… 10 years or so? Come and feel the beat!

Samm Bennett, a native of Birmingham, Alabama, was active in the New York downtown scene during the 1980s and early 90s with such celebrated projects as Semantics with guitarist Elliott Sharp and saxophonist Ned Rothenberg, Third Person with the late cellist Tom Cora, Chunk, as well as a solo artist. In 1995 he moved to Tokyo, where for the past 18 years he has been busy with all manner of musical projects orbiting around his singing, songwriting, drumming, electronics, and improvising. Bennett’s multifaceted sonic pursuits can be discovered anew at his website: polarityrecords.com

Composer and mulit-instrumentalist Ned Rothenberg has been internationally acclaimed for both his solo and ensemble music, presented for the past 30 years in North and South America, Europe and Asia. He performs primarily on the alto saxophone, clarinet , bass clarinet, and the shakuhachi – an endblown Japanese bamboo flute. He leads the trio Sync, with Jerome Harris, guitars and Samir Chatterjee, tabla. Recent recordings include Quintet for Clarinet and Strings, Ryu Nashi (new music for shakuhachi), Inner Diaspora, The Lumina Recordings and Ghost Stories, all released on John Zorn’s acclaimed Tzadik label, as well as Live at Roulette with Evan Parker, Are You Be and The Fell Clutch, on Rothenberg’s own Animul label.
nedrothenberg.com

Stomu Takeishi has played electric fretless bass in a variety of jazz settings throughout the ’90s and 2000s. A member of Henry Threadgill’s Make a Move and Zooid, Myra Melford’s Crush Trio (with drummer Kenny Wollesen), and Erik Friedlander’s Topaz (with brother Satoshi Takeishi on percussion), Takeishi has also played in trumpeter Cuong Vu’s group Vu-Tet, and in the North Indian-influenced Alankar. Takeishi performs on Satoko Fujii’s album, South Wind, and has played with such musicians as Henry Threadgill, Don Cherry, Randy Brecker, and Wynton Marsalis. Takeishi has toured internationally with these various groups, from NYC to Finland’s Tampere Festival.