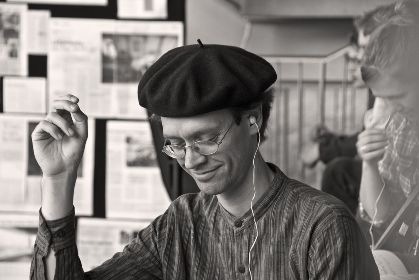 Pianist/composer Samuel Vriezen gives his unique rendition at breakneck speed of Tom Johnson’s conceptual cult classic, The Chord Catalogue, together with a large-scale lyrical constructivist piece of his own, Within Fourths/Within Fifths.

The Chord Catalogue consists of all 8178 chords you can play using the 13 tones of one full octave, from the 78 2-note chords up to the one 13-tone cluster. In Vriezen’s hands the piece becomes an exciting and lively rhythmical exploration of harmonic color. Within Fourths/Within Fifths, dedicated to Johnson, uses very similar techniques to arrive at a completely different result: a long, subtly melodic meditation on rich and relaxed chord progressions.

Then one day in 2003 I received a CD from a radio in Amsterdam that had just broadcast several concerts of my music. The young Dutch performers, whom I didn’t know at all, were very good, and they understood my music well, but I was completely bowled over when I saw that one of the pieces was ‘The Chord Catalogue’! I was not the only one who could play this piece after all! Moreover, the young man who played it did so more accurately and more steadily than I could, and in about half the time! This was Samuel Vriezen, whose own music I also began to appreciate in the following years, especially ‘Within Fourths/Within Fifths’.

Dutch composer SAMUEL VRIEZEN (1973) studied mathematics before studying composition the Royal Conservatory at The Hague. In recent years, besides being active as a composer of experimental chamber music, Vriezen has regularly performed as a pianist and published poetry and essays in Dutch on a wide range of musical and literary subjects.