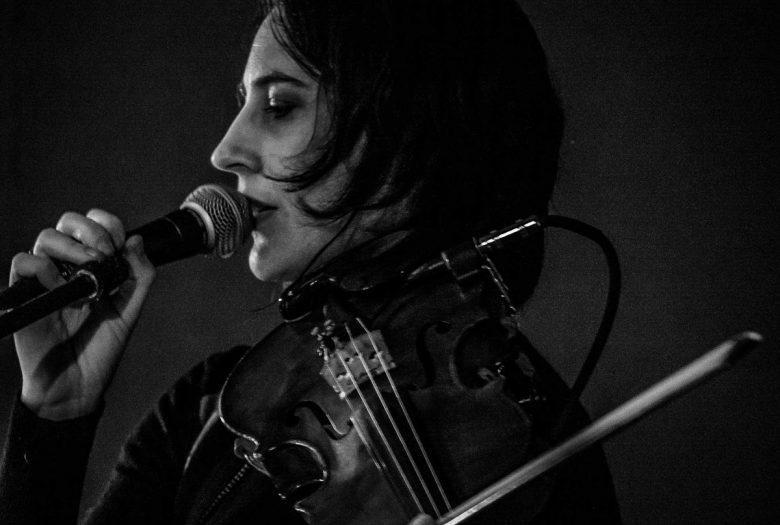 The Sarah Bernstein Quartet performs compositions that mine the characteristic interplay of structure and freedom found in jazz, while offering glimpses of conceptual and textual aspects that form a bridge to Bernstein’s other works and projects. Here the focus stays on the musicians’ engagement with the material and the moment, through individual and interactive improvisation.

Sarah Bernstein is a violinist, composer, improviser, vocalist and poet. Her duo Unearthish with Satoshi Takeishi presents minimalist motifs with avant-jazz song form and original poetry, and improvisational trio Iron Dog with Stuart Popejoy and Andrew Drury showcases her sonic range on processed violin and spoken word. Her recently debuted Chamber Project includes a string quartet with Scott Tixier, Mat Maneri, and Rubin Kodheli, alongside new compositions for nine instruments in various configurations. The Sarah Bernstein Quartet features her works for violin and rhythm section. Her film scores include the web documentaries of photojournalist Katja Heinemann. Originally from San Francisco, Sarah lives in Brooklyn, New York. She holds a BFA in Violin Performance from the California Institute of the Arts and an MA in Jazz Studies from CUNY Queens College.

Pianist-composer Kris Davis has blossomed as one of the singular talents on the New York jazz scene, a deeply thoughtful, resolutely individual artist who offers “uncommon creative adventure,” according to JazzTimes. Reviewing one of the series of striking albums that Davis has released over the past decade, the Chicago Sun-Times lauded the “sense of kaleidoscopic possibilities” in her playing and compositions. Her newest album as a leader is the quintet set Capricorn Climber (Clean Feed, 2013). She made her debut on record as a leader with Lifespan (Fresh Sound New Talent, 2003), followed by more for the Fresh Sound label: the quartet discs The Slightest Shift (2006) and Rye Eclipse (2008), then the trio set Good Citizen (2010). Her 2011 solo piano album on Clean Feed, Aeriol Piano, appeared on Best of the Year lists in The New York Times, JazzTimes and Art Forum. Davis wrote the arrangements for saxophonist-composer Tony Malaby’s nonet album Novela, released by Clean Feed in
2011 and making Best of the Year lists in DownBeat and JazzTimes. The pianist is part of the collaborative Paradoxical Frog with Ingrid Laubrock and drummer Tyshawn Sorey. Union, the trio’s 2011 album on Clean Feed, made Best of the Year lists by National Public Radio, The New York Times and All About Jazz. Davis earned a bachelor’s degree in Jazz Piano from the University of Toronto and a master’s in Classical Composition from the City College of New York. She teaches at the School for Improvised Music. For 2013, New York City’s Jazz Gallery has given Davis a commissioning residency to write for her trio with Tom Rainey and John Hébert and the Shifting Foundation has awarded her a grant to compose for a new large ensemble. About her art, JazzTimes declared: “Davis draws you in so effortlessly that the brilliance of what she’s doing doesn’t hit you until the piece has
slipped past.”

Born in San Diego, CA and raised in Sacramento, Ches Smith came up in a scene of punks and metal musicians who were listening to and experimenting with jazz and free improvisation. He studied philosophy at the University of Oregon before relocating to the San Francisco Bay area in 1995. After a few years of playing with obscure bands and intensive study with drummer/educator Peter Magadini, he enrolled in the graduate program at Mills College in Oakland at the suggestion of percussionist William Winant. There he studied percussion, improvisation, and composition with Winant, Fred Frith, Pauline Oliveros and Alvin Curran. One of Winant’s first “assignments” for Ches was to sub in his touring gig at the time, Mr. Bungle (here he met bassist / composer Trevor Dunn who would later hire him for the second incarnation of his Trio-Convulsant). During his time at Mills, Ches co-founded two bands: Theory of Ruin (with Fudgetunnel / Nailbomb frontman Alex Newport), and Good for Cows (wtih Nels Cline Singers’ Devin Hoff). He currently performs and records with Marc Ribot’s Ceramic Dog, the Mary Halvorson Quintet, Xiu Xiu, Tim Berne’s Snakeoil, and Secret Chiefs 3. He has also performed with Jandek, Terry Riley, Iggy Pop, John Zorn, Annie Gosfield, Baikida Carroll, Wadada Leo Smith, John Tchicai, Fred Frith, and Nels Cline. He also leads a quintet called These Arches (with Tim Berne, Mary Halvorson, Tony Malaby, and Andrea Parkins), and a solo percussion project called
Congs for Brums. He currently lives in Brooklyn, NY.