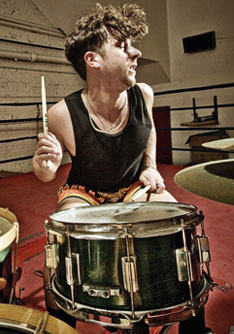 On September 24, drummer/composer/storyteller Sean Noonan will celebrate the August 14 release of A Gambler’s Hand, his third release on Songlines Recordings, with a show at Roulette. A Gambler’s Hand, a suite for amplified/unamplified string quartet and drum kit/percussion, combines the aesthetics of downtown jazz/rock, improv and comprovisation with composition inspired by American experimentalists such as Cowell, Nancarrow and Zorn. At any particular moment, rock grooves might be locking with insistent string ostinatos, which then morph into spiky counterpoint reminiscent of Bartok. Delicate-harsh writing for the quartet is woven around Sean’s eclectic, lyrical and organic drumming in a highly original fusion. The music represents an original story by Noonan, an absurd, dreamlike tale of an Irish gambler who one day finds himself trapped inside a wall. The story has been adapted for a 30-minute silent film that will receive its premiere at the performance; Noonan will also narrate parts of the story between movements.

Praised by the New York Times for its “focused, fluid performance” and by Sequenza 21 for its “fire, fantasy and absolute musical commitment,” The Momenta Quartet has premiered over fifty works in the past seven years and has collaborated with over 80 living composers. Since 2004, Momenta has given over 100 concerts, among them 60 in New York City at such venues as Roulette, The Stone, Le Poisson Rouge, Issue Project Room, Tonic, BargeMusic, Symphony Space, Americas Society, Asia Society, and the Austrian Cultural Forum. The quartet is celebrated for its innovative programming, juxtaposing contemporary works from widely divergent aesthetics with music from the classical canon.

A diverse group of improvisers will join Noonan and Momenta. Violist Mat Maneri has recorded with Cecil Taylor, Matthew Shipp, Joe Morris, Joe Maneri, Gerald Cleaver, Tim Berne, Borah Bergman, Mark Dresser, William Parker, Michael Formanek and John Lockwood, as well as with his own trio, quartet, and quintet. Jason Kao Hwang (violin/viola) has created works ranging across jazz, classical, new and world music. Stories Before Within (2008, Innova),featuring his jazz quartet EDGE, was chosen as one of the Top Ten CDs of the year by Coda Magazine, and his chamber opera, The Floating Box, A Story in Chinatown (New World Records), presented by the Asia Society in 2001, was named one of the Top Ten Opera Recordings of 2005 by Opera News. Violinist Tom Swafford, who is also featured on A Gambler’s Hand, has received several notable awards including the Charles Ives Prize from the American Academy of Arts and Letters, an Eisner Prize from the University of California, Berkeley, the Mabel Daniels Prize for music from Tufts University and a piano soloist award from the Lionel Hampton Jazz Festival.