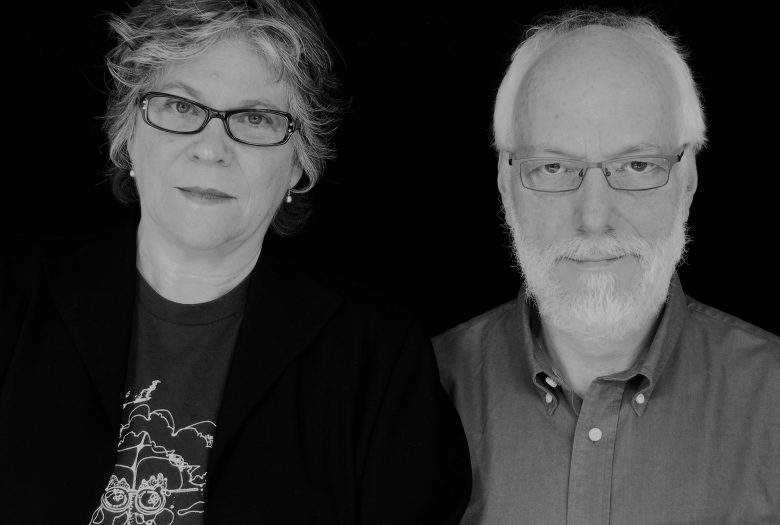 See Hear Now is a real-time music and video collaboration that seeks to merge the sonic and the visible, and to transport the performers and audience to a transcendent experience. In their individual work, the artists are fascinated by sounds and images from nature and life. To create his live improvisations, David begins with the acoustic sounds he draws from his piano, small instruments and found objects. When he expands them through live electronic transformations and spatial diffusion they retain the power of natural sound. Gisela, a photographer, has extended her image making into video and projection. Using multiple projectors and mirrors, her layered video imagery collages movements and rhythms she observes in our world. With a system David developed, Gisela performs her imagery with the same immediacy as David performs his music. After a year of working in their studio, they look forward to creating another unique installation in Roulette’s space. Each night’s improvisation focuses on a different theme.

See Hear Now premiered in upstate New York in 1999 and over the following year performed around the eastern US, including the Knitting Factory and Roulette in New York City. In a series of loft installations, the Gampers explored alternative ways of immersing both audience and performers. Performances have included guest artists such as Stuart Dempster, Pauline Oliveros, Stephen Vitiello, Fritz Hauser, Chris Gamper, Straylight’s Geoff Gersh and Jason Finkelman, the Juilliard Electric Ensemble, Monique Buzzarté and Zanana. RouletteTV produced a performance which was first broadcast in 2003. The duo was featured in Brooklyn College’s Electroacoustic Music Festival in 2003, the 2004 SOUNDPlay festival in Toronto and in Juilliard’s 2005 Beyond the Machine festival in New York City. They released their DVD See Hear Now: Visible Music in 2005. Recent installations and performances include the Krannert Art Museum at the University of Illinois at Urbana-Champaign, Roulette’s Festival of Mixology, Optisonic Tea at Diapason Gallery in NYC. and ISSUE: Project Room’s Sensorium festival in a Brooklyn silo.

David Gamper moves freely among the worlds of music performance, improvisation, and electronic instrument design. These passions merge in the performer controlled sound processing environments he has created for acoustic improvising musicians. He is a member of Deep Listening Band (with Pauline Oliveros and Stuart Dempster) since 1990, and has performed frequently as a duo with Oliveros. The recording of their concert at the IJsbreker in Amsterdam has been described as “the pinnacle of the Oliveros-Gamper collaborations, music that through its depth, reveals ever more profound expression.” Gamper’s solo piece Conch was in the Whitney Museum of American Art’s BitStreams exhibition and is on the CD of sound art from that show. He appears on many recordings with Deep Listening Band and others.

Gisela Gamper, prior to her video work with See Hear Now, has been photographing and exhibiting for over 35 years. For See Hear Now she expanded her fascination with textures and collage into the realms of movement and color. The video she creates for live mixing in improvised performance captures the rhythms and colors observed in our world. Gamper exhibited widely and among her grants and numerous awards are two fellowship grants from the Vermont Council on the Arts and the Hasselblad Cover Award in 1991. Gamper’s photographs are in the collection of the Albany Institute of History & Art in Albany, NY and in many private collections.

More information is at www.seehearnow.org