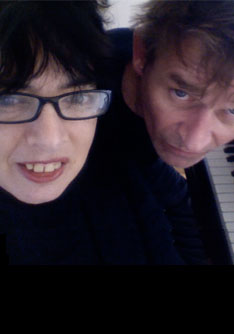 Over two nights, Shelley Hirsch and Simon Ho celebrate the release of their new CD, “Where Were You Then?” on Tzadik’s Key Series

Composed by Hirsch and Ho, “Where Were You Then?” blends songs, story telling and rich atmospheric soundscapes and represents a new chapter in their longstanding collaboration. ALSO ON MARCH 29th

With a voice that slips effortlessly between speech melody and pure sound, Hirsch’s stories work perfectly with the dreamlike state and shifting moods of their music (with instrumental arrangements by Ho).  The stories cover a wide territory, from hitch hiking in Germany in 1972, to living in a squat in Amsterdam, to a song about online dating and remembering the passing of a loved one.  The multilayered stories are filled with vivid details, humor, tenderness, loss and many odd twists in which each listener is likely to find their own meaning.

David Garland of WNYC called the CD “compelling and engrossing”.

“It’s an album to be savored with complete attention and it’s like a love letter itself, enveloped in the naked truth”, wrote Ernie Paik in the Chattanooga Post

Kurt Gottschalk of WFMU Radio wrote “Gorgeous .. Shelley Hirsch is among the most honest of improvisers, direct and deeply in the moment. When she turns that candor and intimacy to composed works, as in her “O Little Town of East New York,” the results can be revelatory in the strictest sense of the word. With composer Simon Ho, Hirsch has created a work that follows in that vein, and one of her finest records to date.”

“Where Were You Then? is an evocative, nostalgic, and stylistic exploration of personal and cultural memory”, wrote Robert Egert in WG News and Arts.