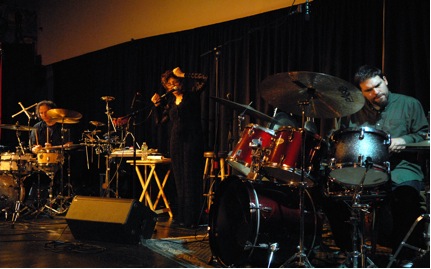 Jim Meneses has been working as a percussionist professionally since 1975.  He has worked and performed in international projects with many established players.  His playing can be described as genre shifting, moving delicately from improvisation and sound design to aggressive rock and metal influences.  His current groups include Ottokar, a progressive rock group from Philadelphia, Modiano USA, a vehicle for soundtracks and ambient work of various kinds, and the new trio Hirsch/Meneses/Pride.

New York City based percussionist Mike Pride has worked with everyone from improvised music icon Anthony Braxton to punk legends Millions Of Dead Cops and has toured extensively on four continents and appeared on more than 85 recordings. Pride currently leads From Bacteria To Boys, and the 7-drummer installation-band: Drummer’s Corpse, both on the AUM Fidelity record label.