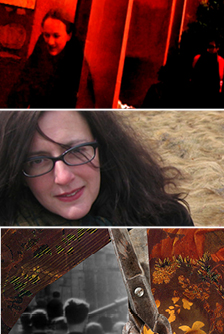 King Lavra is a micro-opera by Czech composer, Jan Jirásek, with live video by Sheri Wills, and performed by KHORIKOS. Based on an old folk tale, King Lavra is a very contemporary re-telling of secrets concealed and revealed: a psychological story of an individual hiding a silent shame and a political one of the people’s need to know the true nature of their leaders.

Sheri Wills is an artist whose work is based in film, video performance & installation. Her work has been exhibited around the world, including the Museum of Modern Art in New York, the London Film Festival and the International Film Festival in Rotterdam and is featured in the Rizzoli book, Sonic Graphics:  Seeing Sound, by Matt Woolman. She has had one-person screenings at the Director’s Lounge in Berlin, the Robert(a) Beck Memorial Cinema in NYC, and the Telluride International Film Exposition.

KHORIKOS, Manhattan representative of WQXR’s Battle of the Boroughs 2012, is an a capella ensemble that enlists musicians from the NYC area, who are professionally and passionately dedicated to cultivating distinctive interpretations of musical works ranging from medieval polyphony to contemporary sound sculpture. What sets KHORIKOS apart from other ensembles is its unique approach to programming and performance, and its vision to bring “classical” music back into the mainstream. The artistic direction guiding the ensemble is successfully bridging the gap of formality that currently prevents a large segment of our population from taking an interest in classical music. By bringing the music to where the people are, in way that will move them and inspire them emotionally, KHORIKOS is making classical music relevant and widely loved and appreciated.