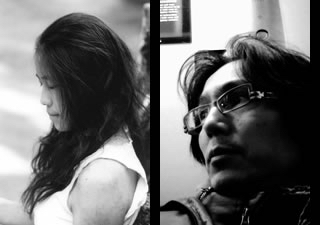 Shoko Nagai/Satoshi Takeishi’s Vortex perform their new work Morphosis—a series of compositions for exploring how the energy will flow and transform between different musical styles and dynamics connecting them to portray a story of “becoming.”

VORTEX started in 2002 as a way to expand the possibility of sonic palette for the use in contemporary jazz composition and improvisation. Shoko Nagai (piano, accordion, analog synthesizers, electronics) and Satoshi Takeishi (playing a unique “hybrid set” consisting of both western and eastern tradition percussions) using a variety of acoustic instruments and electronic processing, have successfully created sonic world of such vividness that their music has been described as “Treat every moment as an opportunity for deep synchronicity” (The New York Times, Giovanni Russonello). Their mission is to integrate cultural, technological and musical elements that surround us in everyday life into a coherent musical structure. All the possibilities of the musical elements accessible to them and the strength of the duo as performers crosses any boundary, while at the same time never losing connection to the spirit of improvisation. The duo has tour and concerts world wide. Several of their scored works can be heard in a full feature film and documentary films ( HBO, PBS, Toronto, Vancouver International film festival received Impact award 2016 and DOC NYC) Vortex is Chamber Music America 2021, City Arts Coup 2021, NYFA 2010, and JazzJantz 2008 Grant winner.

Shoko Nagai is a versatile musical artist who improvises and performs with world-renowned musicians on piano and accordion and composes original scores for films and live performances. Since moving to the U.S. from Japan and studying classical and jazz music at Berklee, she has adapted her mastery of the keyboard to prepared piano, accordion, Moog synthesizer, and other instruments. Whether she is performing Klezmer, Balkan or experimental music, Nagai is a charismatic presence onstage, who hypnotizes audiences with her intense focus and virtuoso sound. A veteran of the New York downtown music scene, she performs with John Zorn, Erik Friedlander, Marc Ribot, Miho Hatori (Cibo Matto), Satoshi Takeishi, Elliot Sharp and many eclectic performers. Several of scored works can be heard in a full feature film and documentary films ( HBO, PBS, NHK, Toronto, Vancouver International film festival received Impact award 2016 and DOC NYC) Received Chamber Music America 2021, City Arts Coup 2021, NYFA 2010, and JazzJantz 2008 Grant winner.

Percussionist Satoshi Takeishi has been living in New York since 1991 and he has performed and recorded in vast variety of genre, from world music, jazz, contemporary classical music to experimental electronic music. He continues to explore multi-cultural, electronics and improvisational music with local musicians and composers in New York.