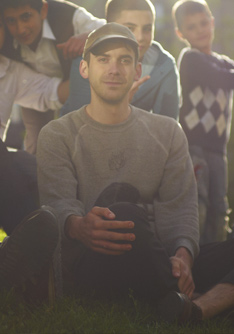 Skeletons celebrate the release of their new album “The Bus” with an evening of SKELETONS BIG BAND compositions by band members Matt Mehlan, Jason McMahon and Jon Leland, dance, boombox orchestras and special guest performances.  Recorded with upwards of 20 musicians from New York’s various undergrounds (members of Little Women, Extra Life, PC Worship, Starring, Tune Yards, NOMO, and more), “The Bus” is an album like no other in the band’s catalog. A culmination of ideas bubbling in the DNA of Skeletons’ music for some time, “The Bus” is a raw, cinematic, melancholy experience.

Shinkoyo will be releasing the album in two very limited edition LPs on September 18th. Both editions will be pressed to white vinyl, with silk-screened custom jackets. A special edition of 100 will contain various “The Bus” ephemera: scores for the music, photos, poems, film stills – as well as nearly an album’s worth of extra music, “Chicago to Elyria”.

SKELETONS are an American entertainment unit who live in New York City. They have released recordings on the Tomlab, Ghostly, and Shinkoyo labels. We spoke with guitarist Jason McMahon.  http://skeletonstv.tumblr.com/

Mas Ysa is a recording artist for The Social Registry and a member of the Shinkoyo Art Collective.  Formerly known as Ablehearts.
http://www.facebook.com/pages/MAS-YSA/229905030425993