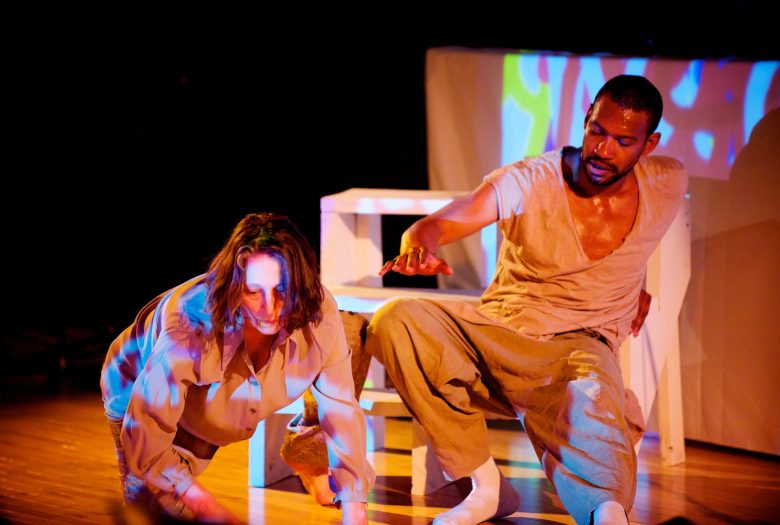 R&R first performed in January 2015 as a quartet, under the title ‘Challenge Listening’ with Patricia Nicholson, Jason Jordan – dance and music – Jason Kao Hwang, TA Thompson. The quintet came together at Judson Church on Saturday July 12 2015 at the 20th Vision Festival with the addition of Bill Mazza’s live art projections. This will be the most complete presentation.

Resurrection Revolution (R&R) is a unique quintet with 2 dancers, 2 musicians and a visual artist. The unique idea is that the band is built on an aesthetic and a social common, rather than a single artistic discipline.
The aesthetic might be called FreeJazz utilizing improvisation as the base and employing clear structures that are built in rehearsals and in the course of living. All members share a sophisticated and highly developed understanding of what improvisation is as well as a common social understanding that we share responsibility for our world.

For Patricia Nicholson, this comes out of a lifetime of working for a common good. It comes from a lifetime of seeing dance as a musical instrument and from a history of social action inherited from her mother. (Kathleen Nicholson Wilkins, an activist in the Civil Rights, Peace and anti-nuclear movements.) As an artist, Nicholson reinterpreted her social conscience through conceiving and choreographing work such as a Thousand Cranes for the opening of the 2nd UN Special Sessions on Disarmament; and performing dance as demonstration at the Riverside Research Institute and in DC at the Arms Bazaar etc. This same notion of responsibility is expressed in work like Vision Peace & Battle Cries or DanceWordsSpeakPeace and Studies in Freedom etc.

As artists we are here to inspire. This is not so much a literal agenda as a spiritual goal.