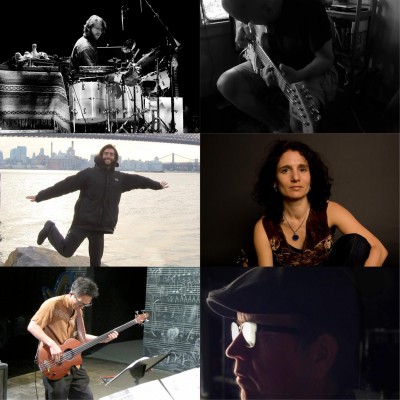 Billy Martin of Medeski Martin and Wood.  Martin has relentlessly pursued new musical contexts, from purely free improvisation to chamber compositions to film music – including his recent score to director Szabolcs Hajdu’s Mirage. Much of his output is available via his own Amulet Records label, which has also released albums by Derek Bailey, Dave Burrell, John Lurie, and, most recently, the vinyl edition of The Road to Jajouka – a series of collaborations (produced by Martin) between the Master Musicians of Jajouka and such artists as Ornette Coleman, Flea, Marc Ribot, John Zorn, Lee Ranaldo, Bill Laswell, Mickey Hart, Medeski Martin and Wood, and more. Martin is also an accomplished filmmaker and visual artist, whose work has been exhibited in solo and group installations around the world – including 2014’s Cartegena de Indias Bienal in Colombia.

Kevin Bud Jones played his first NYC gigs in 1981 as guitarist in the DIY dance band Dog Eat Dog. Sharing bills with Sonic Youth, Swans, Three Teens Kill Four and other notables of the time, DED was requested by DNA to open their farewell show at CBGB’s in 1982. Post Dog Eat Dog Kevin performed at the White Columns Speed Trials in the short lived band Big Day while working in his home studio with various artists producing music for film and performance. The last four years Kevin Bud Jones has been working with the trio Airport Seven  while continuing to release home recordings of his own compositions The past year finds Kevin working with Chris Cochrane in duet as well as with the band Collapsible Shoulder. As the result of an injury in February Kevin had to put down his guitar and has taken up analog synthesis, samples and electronics as his current instrument.

Brian Chase is a drummer and composer living in Brooklyn.  His diverse range of work/play includes that with rock band Yeah Yeah Yeahs, the community of the New York improvised music scene, and Drums & Drones, an electro-acoustic project focusing on the application of just intonation to drums and percussion; the debut Drums & Drones album was released in February of 2013 on the Pogus label and features videos by artists Ursula Scherrer and Erik Zajaceskowski.  Album releases of 2014 include Dub Narcotic Session with pianist Thollem McDonas and we thought we could do anything with guitarist Alan Licht.  In addition to the drums, Brian is a regular practitioner of Ashtanga yoga.