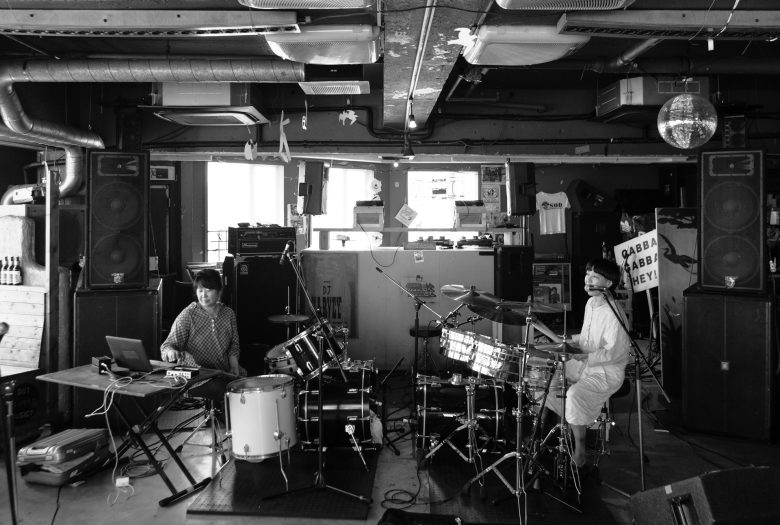 YoshimiO and Ikue Mori met in the 80’s in Osaka, and have been involved together with different projects throughout the decades. Twindrum is project that started in Brooklyn in 2013, and performed in Japan in 2014.

YOSHIMIO is an original member of the world’s most radical experimental music group BOREDOMS from Japan. Yoshimi is known as a drummer but is a multi instrumentalist who also plays guitar, a keyboard, trumpet, and her own voice.  She is also the leader of the  experimental band OOIOO, a member of Free Kitten with Kim Gordon (ex. Sonic Youth),  and Saicobaba – an improvisational band which uses electronics mixed with traditional Indian musical instruments.

YOSHIMIO has contributed to innumerable session works and participated in many musical adventures outside of her usual projects. She created an original score for the abstract documentary film “YUNNAN COLORFREE” and has written music for TV commercials under the name YOSHIMIO. YOSHIMI is truly a multi-disciplinary artist. Besides music, YOSHIMI is the head designer / creative director for the fashion line Emeraldthirteen.

With her creative work in music at the base, she projects authenticity in her entire vision.  Whether she is projecting her voice, channeling the characteristic vibrations of an instrument, or designing clothing YOSHIMI propels primeval expression with vivid color, cohabiting space between many dimensions without force, to create a devotedly multidimensional sensitivity to forge non-discriminate expression, harnessing the inherent force propelling from herself and the mediums she uses to create.

After moving to New York from her native Tokyo in 1977, Ikue Mori began playing drums in seminal No Wave band DNA with fellow noise pioneers Arto Lindsay and Tim Wright. In the mid 1980s, Ikue began to employ drum machines in the context of improvised music. While limited to the standard technology provided by the drum machine, she nonetheless forged her own signature style. Throughout in 1990s she collaborated with numerous improvisors throughout the United States, Europe, and Asia, while continuing to produce and record her own music. After becoming involved with the city’s flourishing improvisational scene via John Zorn, she began experimenting with drum machines, and in recent years utilizes the laptop as her primary instrument. Ikue has lead workshops and lectures at University of Gothenburg, Dartmouth College, New England Conservatory, Mills College, Stanford University, and The School of the Art Institute of Chicago.