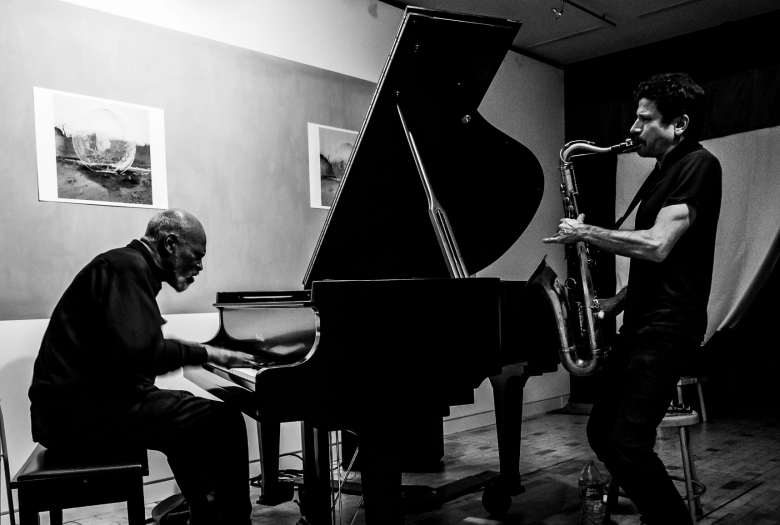 Stephen Gauci and Cooper-Moore at Roulette 2020

Fresh off of a seven month residency at Brooklyn’s Happylucky no.1, and with three recent recordings under their belt, iconic avant jazz pianist Cooper-Moore, and saxophonist Stephen Gauci will perform a set of spontaneous improvisations. Both known for their highly personal musical conception, intensity of purpose, and unbounded creative flow, Moore and Gauci combine their deeply idiosyncratic voices to design a breathtakingly astringent whole.

This performance was originally scheduled for Spring 2020, but was postponed and rescheduled due to Covid-19. Roulette’s Fall season will be presented virtually and available for free on a variety of streaming platforms. Our theater is currently closed for public performances as a result of the Covid-19 pandemic and the safety measures that Roulette has put in place to keep staff, artists, and the public safe.

Cooper-Moore and Stephen Gauci met in 2018 at a performance at Brooklyn’s happylucky no.1 gallery. This was the start of an entirely unexpected and auspicious musical relationship. From June through December 2018 they performed 25 concerts at the gallery, and released their debut recording (studio sessions vol. 1, gaucimusic recordings). They have since completed two more recordings slated for release in 2020 (577 records). Gauci & Moore continue to perform regularly in NYC, and internationally.

Stephen Gauci is recognized as one of the most strikingly original saxophonists on the New York City improvised music scene. Stricken by a childhood illness that has left him with a profound hearing loss, Gauci was drawn to the clear, deep, tone of the tenor saxophone. This was the first step in a lifelong relationship with, and investigation of tone, timbre, and especially voice. The nature of Gauci’s hearing loss is that outer sounds require of him the utmost level of concentration and focus. The flip side, however, is that inner sounds, and the inner voice, are magnified — crystal clear and singing. The intense outward focus developed as a result of Gauci’s hearing impairment has been turned inward like a laser to illuminate, and manifest, the inner voice.

As a composer, performer, instrument builder/designer, storyteller, teacher, mentor, and organizer, Cooper-Moore has been a major, if somewhat behind-the-scenes, catalyst in the world of creative music for over 40 years. As a child prodigy, Cooper-Moore played piano in churches near his birthplace in the Piedmont region of the Blue Ridge Mountains of Virginia. His performance roots in the realm of avant jazz music date to the NYC Loft Jazz era in the early/mid-70s. His first fully committed jazz group was formed in 1970 – the collective trio Apogee with David S. Ware and drummer Marc Edwards. Sonny Rollins asked them to open for him at the Village Vanguard in 1973, and they did so with aplomb. A studio recording of this group was made in 1977, and issued as Birth of a Being on hatHut under Ware’s name in 1979 (re-mixed and re-issued in expanded form on AUM Fidelity in 2015!). Following an evidently rather trying European tour with Ware, Beaver Harris, and Brian Smith in 1981, Cooper-Moore returned home and completely destroyed his piano, with sledgehammer and fire, in his backyard. He didn’t play piano again until some years after, instead focusing his energies from 1981-1985 on developing and implementing curriculum to teach children through music via the Head Start program. Returning to New York in 1985, he spent a great part of his creative time working and performing with theatre and dance productions, largely utilizing his hand-crafted instruments. It was not until the early 90s, when William Parker asked him to join his group In Order To Survive, that Cooper-Moore’s pianistic gifts were again regularly featured in the jazz context. In the early ‘aughts the group Triptych Myth was his own first regular working jazz group in decades and together they blazed some trails and released two albums: one rich formative, and one exquisite. A destined creative re-union with David S. Ware in the Planetary Unknown quartet, the Digital Primitives trio with Assif Tsahar & Chad Taylor, and continued work with William Parker followed. Cooper-Moore’s creative life continues well-strong and unabated into the present day. He will was the Lifetime Achievement Honoree at the 22nd iteration of Vision Festval, NYC on May 29, 2017.