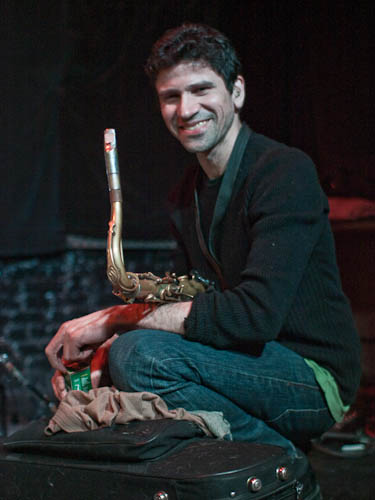 Stephen Gauci’s “Basso Continuo”
The name “Basso Continuo” refers not to early music but rather to the double double bass backbone Mike Bisio and Ken Filiano (Ingebrigt Haker-Flaten on the CD) provide to Stephen Gauci’s quartet. On this remarkable group these sub-sonic kindred spirits interweave to form a lattice work that supports the multitude of sounds that tenor saxophonist Stephen Gauci and trumpeter Nate Wooley draw from their instruments and imaginations. Somehow the pair squeeze their oversized axes into every nook and cranny the music creates. They are here, then there, lurking, then striking. In sharp contrast to the faux-baroque name of Gauci’s quartet, the title of the album and each of the tracks have Indian overtones,perhaps bringing to mind John Coltrane’s late spiritual works. And of course Gauci plays the tenor saxophone, and so, like all who followed Coltrane, owes a debt to the tenor’s great master. Gauci’s more immediate indebtedness, however, is to his former teachers,”mainstream” greats Joe Lovano and George Garzone. His front-line running mate, Wooley, is one of the most daring experimentalists of present day improvisation and a brass master in his own right. These two teams -the pair of provocative horn players and the contemporary basso continuo – make a fantastic and unexpected combination.

The E.R.A. is a New York City based project that was formed in June of 2007. The E.R.A. is a septet with the power of a trio dealing with a subtle sensibiliy, silence, harmony and texture. Since 2005, these seven musicians have each performed and recorded in various duos, trios, and quartets. Inspired by these smaller combinations, Chris Welcome, Johnathan Moritz, John McLellan and Shayna Dulberger composed and arranged music for this unique instrumentation. They released their first album, ‘Introducing…The E.R.A.’ in may of 2008. It is available at Downtown Music Gallery and emptyroommusic.net.