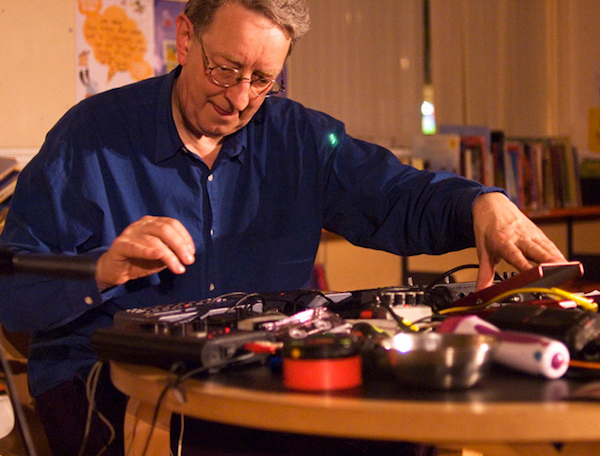 Steve Beresford (Wellington, Shropshire, 1950) is a composer, musician and arranger, a veteran of countless bands from the Slits to the Melody Four. He has been a central figure in the British improvising scene for over thirty years working with the likes of Derek Bailey, Evan Parker and Han Bennink. For the past decade he has concentrated most of his compositional efforts on tracks for independent British film and television. Strange sambas, jittery jazz, melancholy moods and more from one of the most consistently imaginative and creative musicians in Europe. During the 1970s, Beresford was a co-founder and co-editor of the magazine Musics, which dealt mainly with free improvisation, whilst during the early 1980s he helped to set up the somewhat glossier publication Collusion, which had a wider musical remit, covering fields such as rap, heavy metal, classical music, film music, pop music as well as the avant-garde and free improvisation. Along with David Toop, Beresford was also a prime mover of the London Musicians Collective.

in addition to frequent solo performances and leading her own ensembles, she frequently collaborates with the following ensembles: Still Life with Commentator with pianist/composer vijay iyer, poet/hip hop artist mike ladd; duo with tunrtablist/video artist christian marclay: billy martin’s IOOI with ikue mori and dj olive, and artist guy richards smit’s rock band Maxi Geil! and Playcolt. Okkyung has released the following albums under her name: her debut album, Nihm on Tzadik; a duo recording with christian marclay on My Cat is an Alien label’s split LP series; 30-minute companion cd of her own compositions in collaboration with artist colin stinson for his art book Dust to Dust, and a solo cello album I saw the Ghost of an Unknown Soul and it Said… to be releassed on thurston moore’s Ecstatic Peace labe in 2007.

Peter Evans has been a member of the New York musical community since 2003, when he moved to the city after graduating Oberlin Conservatory. Peter currently works in a wide variety of areas, including solo performance, chamber orchestras, performance art, free improvised settings, electro-acoustic music and composition. As a performer, Evans has been working to break through the technical barriers of his instrument and enjoys playing with steady configurations of improvisers; each band explores a specific concept or style as much as possible. Current bands include the Peter Evans Quartet (with Brandon Seabrook, Tom Blancarte, & Kevin Shea), Moppa Elliott’s terrorist bebop band Mostly Other People Do the Killing, the hyperactive free-improvisation duo Sparks (with Tom Blancarte), the free-jazz quintet Carnivalskin (with Klaus Kugel and Bruce Eisenbeil), the Language Of with Charles Evans, duos with trumpeter Nate Wooley and saxophonist Dave Reminick, the New York Trumpet Ensemble, as well as a sustained interest in solo performance. In New York, Peter also performs contemporary notated music with groups such as the International Contemporary Ensemble, Alarm Will Sound, Contiuum, and Ensemble 21. He has continued to perform on piccolo trumpet in Baroque settings, performing Brandenburg Concerto No. 2 at the Bargemusic series, and in Bach’s Mass in B Minor at St Peter’s Church. Other collaborators have included: Mary Halvorson, Dave Taylor, John Zorn, Okkyung Lee, Taylor Ho Bynum, Perry Robinson, Jim Black, Evan Parker, Ned Rothenberg, Mark Gould, Jack Wright, Luka Ivanovic, Brian Chase, and Alan Kay. Recent travels have brought Peter to venues and festivals in the U.S., Canada, Europe, the UK, and Southeast Asia. Recordings include “More is More”, a solo trumpet album on psi, the self-titled first album of the Peter Evans Quartet (on firehouse12), and Shamokin!, the second album by MOPDTK, on HotCup Records.