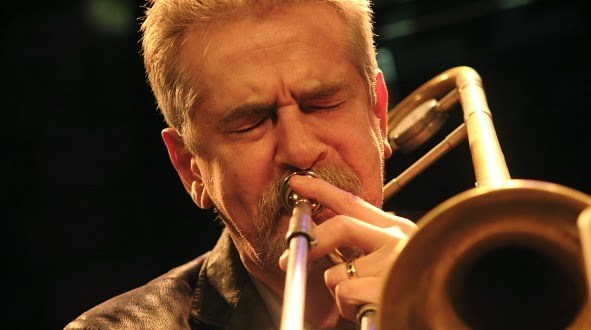 “One of the most adventurous and prolific members of the New York free-jazz community” according to Ed Hazell of Signal To Noise, Steve Swell’s reputation, work ethic and committment to excellence has kept him in the forefront of improvised music and a leading voice on his instrument for more than 20 years. Born in Newark, New Jersey, Swell has been an active member of the New York music community since 1975. He has established himself as a premiere leader and sideman of some of the most exciting groups ever assembled, giving performances at festivals, clubs and theaters in Africa, Asia, Europe, North and South America. His composing talents have been recognized the world over. His “Suite for Players, Dreamers and other Listeners” was voted number 2 in the 2006 Cadence Reader’s Poll. Swell has thirty recordings as a leader or co-leader and is a featured artist on more than ninety other releases. He has taught master classes at universities, elementary schools, high schools, shelters and community centers all across the U.S, and Europe. He is also a teaching artist in the NYC public school system working mostly with special needs children and was awarded the 2008 Jubilation Foundation Fellowship Award of the Tides Foundation in recognition of that work. In 2008 he was nominated Trombonist of the Year by the Jazz Journalists Association and was named Trombonist of the Year, 2008 by the Argentinean journal, “El Intruso.” Swell’s curiosity and need to create has led him to becoming a much heralded sideman affording him the opportunity to participate as an integral part of groups led by some of the most renown musicians in the jazz and improvised worlds. Among those notables are Lionel Hampton, Buddy Rich, Anthony Braxton, Cecil Taylor, William Parker, Alan Silva, Roswell Rudd, Jemeel Moondoc, Ken Vandermark, Makanda Ken McIntyre, Roscoe Mitchell, Dave Burrell, Elliott Sharp and Bill Dixon to name a few. Swell is constantly searching new ways in which to express his restless imagination in his music through his composing and trombone playing. Touchingextremes.com says of Swell’s trombone playing: “We are ever so lucky to have friends like Steve Swell, who plays the damn thing as if that was the last day of his life, injecting the music with huge soul, gravitational pulls towards the right energy channels and astounding technical wizardry.”