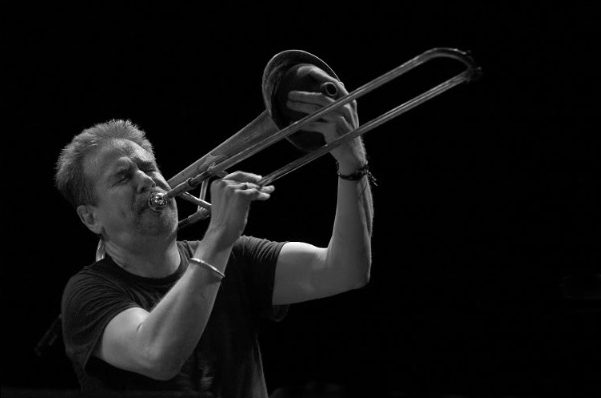 Steve Swell, born in Newark, New Jersey, has been living, working and performing in New York City his entire adult life. In the mid-seventies he studied with Roswell Rudd, Grachan Moncur III and Jimmy Knepper after attending Jersey City State Teacher’s College. He has toured and recorded
with such diverse jazz personalities as mainstreamers Lionel Hampton and Buddy Rich, to
so-called outsiders like Anthony Braxton and Jemeel Moondoc. Swell has 20 recordings as a
leader and is a featured artist on more than ninety other releases. His CD, “Suite For Players, Listeners and Other Dreamers”, recorded on the CIMP label, was ranked number 2 in the 2004
Cadence Readers Poll. He received grant from USArtists International in 2006, a program of the
National Endowment for the Arts, an MCAF award (LMCC) in 2008 and was commissioned for the
Interpretations Series at Merkin Hall in 2006. Steve is also well known for his many collaborations with Cecil Taylor, Bill Dixon, Alan Silva, William Parker, and his many projects including “Slammin’ The Infinite” with Sabir Mateen, The Ullmann/Swell 4tet featuring Barry Altschul, “Unified Theory Of Sound” with Cooper-Moore, “Fire Into Music with Hamid Drake and his large ensemble, Nation Of We. He was the Jazz Journalist’s Associations Trombonist of the Year nominee for 2008. Steve is a Teaching Artist in the NYC public school system working with special ed kids.

Steve has been a part of big bands or large ensembles as long as he has been
performing. He’s toured and recorded with the big bands of Lionel Hampton, Buddy Rich,
Alan Silva, Cecil Taylor, Bill Dixon, Jemeel Moondoc, William Parker and many others. He
formed this band at the end of 2005 to foster what he hopes is more of an integration of the
disparate musical scenes now residing in New York. Steve gives written information,
conductions and other, on the spot, musical directions, but by and large, each performance
is dependent upon the members of the ensemble and their contributions. The written
material is really only a rough guide as to what can develop spontaneously which is what
gives the music its magic. By gathering the many different improvisational disciplines found
in this city, quite possibly new improvisational vocabularies and sensibilities will develop
thereby keeping the art of improvisation a lively one here in our hometown. These three
nights will give the band the opportunity to really come together as never before. Nation Of
We has one recording on Ayler Records.