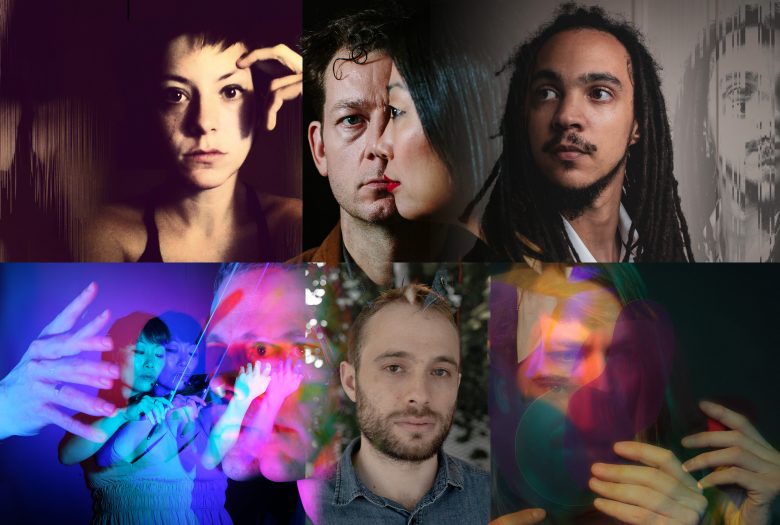 String Noise will start out the evening with a live performance of Way by Alex Mincek, the title track of their latest album on New Focus Recordings – out May 13, 2022! The idea for the piece focuses on making paths, or rather, finding different ways through various austere sonic environments (and/or the physical actions linked to the audible surfaces). Also on the album are (in) tone by Catherine Lamb and Field by Lou Bunk. This album lures you into a wonderland of sonic beauty and extremes. Pauline will then take the stage in joining forces with electronic artist from Pittsburgh Jesse Stiles in their debut as Congregation of Drones. Harris’ virtuosic visceral chops with Stiles’ singular approach to sampling, spatialization, and signal processing combine to create elaborate musical structures where time seems to fold in on itself as the performance unfolds. The music is both extreme and approachable, dashing between delicate fields of chattering chirps and pizzicato pulses into roaring tunnels of cascading harmonic energy.

Their double vinyl Twenty Twenty to be released in July 2022 on Every Possible Recording is a massive new body of music that merges daring and shockingly emotional strings with torrents of pulsating electronics, presenting the listener with immersive, surreal soundscapes created through live processing and experimental sound synthesis. Our friend, conductor/composer/violist Robert Ames, a super-connector from London, together with film composer and podcaster Ben Corrigan will perform a live set from their new collaboration: CARBS. Album just released in April 2022 on Modern Recordings, they had the opportunity to explore their voices as music makers, taking inspiration from their robust history of collaborations and passion for electronic and classical music to create sound that’s both cinematic and danceable, built on lush harmony, catchy patterns and driving rhythms that form an outer space trance. When writing the music on CARBS, Corrigan and Ames weren’t driven by an overarching narrative or theme. Instead, they were driven by spontaneity. As the tracks came together, though, they started to hear it as some kind of otherworldly fantasy. The eerie, wondrous quality of the music felt like roaming through outer space, and they started thinking about extraterrestrial travel and spaceships. There’s a starry-eyed feeling to the music, too, driven by it’s effervescent and sprawling atmospheres. The feeling of joy and unbridled exploration are perhaps the strongest undercurrents of the album, all pulled together by its dreamy, psychedelic album cover by Filipino-Australian visual artist Mark Constantine Inducil.

Finally, after a couple of years of forced dormancy, String Noise Sounds re-emerged in its original formation. A dream project which began as reinforcement to our violin duo with a percussive-based duo, comprised of Jessie Cox on drums and Sam Yulsman on the piano, we navigate even more deeply by inviting like-minded composer/performers to join our long duration improv sets. Together we embark on a sonic journey into the unfamiliar, emerging upon a new space we create together. On this night, we will be graced with the presence of Composer/Vocalist, Bethany Younge.

Violinist Pauline Kim Harris, aka PK or Pauline Kim, is a GRAMMY®-winning recording artist and composer. She has appeared throughout the US, Canada, Europe, Asia, and Australia as soloist, collaborator, and music director. Known for her work with classical avant-punk violin duo String Noise, she has also toured extensively with Orpheus Chamber Orchestra and continues to collaborate with leading new music ensembles in New York City. Active in the experimental music scene, Pauline’s work extends into interdisciplinary worlds, crossing boundaries and integrating visual art, electronics, media, film, and dance to music. She has premiered and recorded works by Alvin Lucier, Christian Wolff, John Zorn, Philip Glass, Tyondai Braxton, Catherine Lamb, Steve Reich, George Lewis, David Lang, Du Yun, and more. Pauline’s debut album, Heroine — a reimagining of the Bach Chaconne and Ockeghem’s Deo Gratias was released in 2019 on Sono Luminus with worldwide distribution. Her second album in Chaconne Project, “Wild at Heart,” was released on Sono Luminus in 2021. Pauline has also recorded for Decca, Tzadik, Northern Spy, Nonesuch, New Focus Recordings, Infrequent Seams, New World Records, Chaikin Records, Unseen Worlds,  and Cold Blue Music, and has been heard on PBS, BBC, NPR, WQXR, WNYC, WKCR and WFMU. Pauline Kim was the first Music Director for the Bill T. Jones/ Arnie Zane Dance Company and has been the featured solo artist for choreographers David Parker of The Bang Group and Pam Tanowitz. Most recently, she was an associate artist at the Atlantic Center for the Arts, had her debut residency at the Stone – New School, resident artist fellow at The Mabel Residency, and is the recipient of the EtM Con Edison Composer Residencies at Bloomingdale School of Music.

Jesse Stiles (b. 1978, Boston, MA) is an electronic composer, performer, installation artist, and software designer. Stiles’ work has been featured at internationally recognized institutions including the Smithsonian American Art Museum, Lincoln Center, the Whitney Museum of American Art, and the Park Avenue Armory. Stiles has appeared multiple times at Carnegie Hall, performing as a soloist with electronic instruments. In his music and artwork, Stiles creates immersive sonic and visual environments that encourage new methods of listening and looking.  His musical output ranges from highly experimental, using texture and spatialization to create abstract clouds of sound, to borderline danceable, exploring the sounds of electronic dance and rock music to create avant-garde performances and recordings.  Stiles’ installation artwork makes use of generative algorithms to control sound, video, light, and robotics – combining these mediums to create synesthetic compositions that transform museums and galleries into evolving audiovisual environments. Stiles has collaborated with many leading figures in experimental music including Pauline Oliveros, Meredith Monk, David Behrman, and Morton Subotnick.  He has been featured as a soloist with the San Francisco Symphony and the New World Symphony, performing with electronic instruments.  Stiles’ recordings have been published by Conrex Records, Specific Recordings, Gagarin Records, and Araca Recs.  Stiles has worked as a sound designer and composer on a wide variety of award-winning films, museum exhibitions, and video games. Starting in 2010, Stiles served as the Music Supervisor for the Merce Cunningham Dance Company.  Working with the company during their precedent-setting “Legacy Tour,” he produced and performed in more than 200 concerts featuring compositions by groundbreaking composers including John Cage, David Tudor, Brian Eno, Radiohead, Sigur Ros, and John Paul Jones.  Stiles’ compositions were featured in many of the company’s site-specific “Event” performances. Stiles is currently a Professor in the School of Music at Carnegie Mellon University, where he leads courses on emerging music technologies.

One of the world’s most brazenly experimental composers, Swiss artist Jessie Cox makes music about the universe – and our future in it. Through avant-garde classical, experimental jazz, and sound art, he has devised his own strand of musical science fiction, one that asks where we go next. For the last decade, his music has been marked by its freeness; his embrace of otherness has led to a body of work described by the LA Times as ‘some of the most experimental music, not just of the day, but the season’. Cox’s music goes forward. When he describes it, he compares it to time travel and space exploration, likening the role of a composer to that of a rocket ship traversing undiscovered galaxies. He is influenced by a vast array of artists who have used their music to imagine futures, and takes Afrofuturism as a core inspiration, asking questions about existence, and the ways we make spaces habitable. Known for its disquieting tone and unexpected structural changes, his music steps into the unknown, and has been referred to by the New Yorker as an example of ‘dynamic pointillism’, a nebulous and ever-expanding sound world that includes ‘breathy instrumental noises, mournfully wailing glissandi, and climactic stampedes of frantic figuration’.

Bethany Younge’s acoustic and electronic music explores the manifold kinesthetic properties of musical performance. For her, the act of music-making cannot be divorced from the physical presence of the human instigator. Her works often incorporate instrumental deconstruction, exaggerated movement, motion tracking, sounding costumes, and/or other aesthetic devices to sonically heighten corporeal expressivity. Younge is currently pursuing her DMA in Music Composition at Columbia University in New York. Her works have been featured in the International Summer Course for New Music Darmstadt, MATA Festival, Resonant Bodies Festival, Gaudeamus Muziekweek, The 16th International Young Composers Meeting, and many other festivals. She has been awarded the Stipend Prize at the International Summer Course for New Music Darmstadt in 2016, the 2020 Kanter/Mivos Prize, the 2022-23 Barcelona Festival Mixtur Commission Award, and has been nominated for the 2022 Gaudeamus prize.

Ben Corrigan hails from Carlisle, Cumbria in the North West of England at the foot of the Pennines. A teen metalhead, he came to London in 2010 to study composition at Trinity Laban in Greenwich. At music college, he discovered the joy of electronic music and experimented with ways to combine that with acoustic forces. Ben has worked with Robert Ames and the London Contemporary Orchestra, orchestrating and arranging for films (Honeyboy, True History of Ned Kelly Gang), concerts (Riceboy Sleeps, Erased Tapes X LCO, William Basinski) and recordings. In TV, he’s done additional composition for Isobel Waller-Bridge, sound design and synth programming for her Black Mirror score, and more recently been the music editor for composer Anne Nikitin’s score on the BBC Pale Horse series. Ben has a music podcast called excuse the mess (which won Bronze in the Best Arts & Culture category at the British Podcast Awards in 2019) – where he interviews other composers and then writes a piece together using just one instrument and electronic manipulation. The listener follows the whole composition process.

Alex Mincek is a composer, performer, and co-director of the New York-based Wet Ink Ensemble. He is a recipient of a Guggenheim Fellowship, Alpert Award, and multiple awards from the American Academy of Arts and Letters. His music has also been recognized through commissions and awards from arts institutions such as the French Ministry of Culture, the National Foundation for Advancement in the Arts, ASCAP, the National Endowment for the Arts, MATA, Radio France, the Barlow Endowment, and the Fromm Music Foundation. Mincek’s music has been programmed at venues and international festivals including Carnegie Hall, Miller Theatre, Wigmore Hall, Strasbourg Musica, Darmstadt (IMD), Ultraschall Berlin, Festival Archipel Geneve, the Contempuls Festival in Prague, and the Ostrava New Music Days. He has collaborated with ensembles including the Orpheus Chamber Orchestra, American Composers Orchestra, Janacek Philharmonic, Ensemble Recherche, Ensemble Linea, Talea, Dal Niente, Yarn/Wire, Mivos and the JACK Quartet. Mincek’s compositional thinking is primarily concerned with creating musical contexts in which diverse sound worlds seamlessly coexist – from raw to highly refined timbres, from rhythmic vitality to abrupt stasis, and from mechanical-like repetition to sinuous continuity. By connecting, combining and alternating seemingly disparate states, he attempts to create a sense of interconnectivity that reveals underlying qualities of coherence and unity. His music frequently explores novel approaches to microtonal harmony by integrating methods often regarded as incompatible. Mincek’s musical thinking is also concerned with how the cognition of physical shape, movement and color can be used as a model for organizing musical sound and structure in relation to psychoacoustics and musical perception more generally. Mincek received his MA from the Manhattan School of Music, where he studied with Nils Vigeland, and his DMA from Columbia University, where he studied with Tristan Murail and Fred Lerdahl.