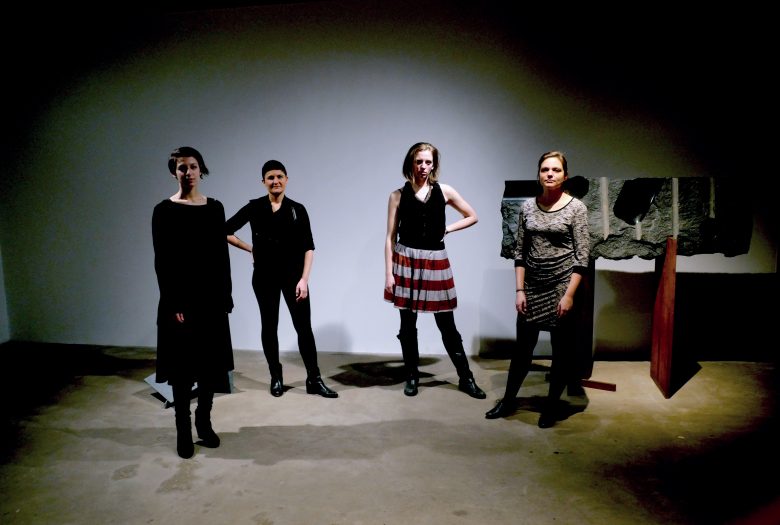 Inspired by the feminist writings of Margaret Atwood and the protest song as artistic genre, this program celebrates stylistically diverse, subversive music by three members of The Rhythm Method alongside American composer Lewis Nielson‘s powerful work Le journal du corps. Through subtly embedded anti- imperialist anthems, torch song vocals, or nearly hidden hums, each of these works incorporates vocalization in order to expand the expressive, political potential of the string quartet. From the anti-capitalist sentiment prevalent in Nielson’s work, to the post-cabaret songs of Meaghan Burke, the intricate graphic scores and suffragette-inspired work of Leah Asher, and a reflection on immigration from Marina Kifferstein, this program covers a wide range of musical material while maintaining a steady hand on the pulse of contemporary issues and aesthetics. With improvisation, vocalization, theatre, and a virtuosic spectrum of extended techniques, the performer/composers of The Rhythm Method defy expectations of genre and preconceptions of what a string quartet ‘can’ or ‘should’ do.

Praised for their “uncompromising and unreserved . . . intense, and sensuously gestural” performances (Examiner), The Rhythm Method strives to reimagine the string quartet in a contemporary context. Since their founding in 2014, the group has given soulful, spirited performances in New York, Vienna, Paris, and Lucerne, and tackled works ranging from classics by Ligeti and Webern to newer works/premieres by Tonia Ko, Dai Fujikura, Andrew Norman, John Zorn, and other living composers, including members of the ensemble. Through a mixture of thoughtful programming, captivating performances, and collaborations with sound artists, visual artists, and songwriters as well as composers, they present concert experiences that engage and challenge their audiences. The Rhythm Method has given performances at Joe’s Pub, The Stone, the Met Museum, the Noguchi Museum, and Roulette, and has been featured on the String Orchestra of Brooklyn’s String Theories Festival, MATA Festival, and the Austrian Cultural Forum’s Moving Sounds Festival. The Rhythm Method recently completed their inaugural Austrian tour, featuring world premieres of new works by sound artists Bernd Klug and Andreas Trobollowitsch, a collaboration with the singer-songwriter collective Loose Lips Sink Ships, and premieres of works by all members of the ensemble. This season marks the kickoff of the quartet’s Hidden Mothers Project, a research- performance-recording initiative highlighting works by historical women composers. It will also bring the first installment of Broad Statements, a celebration of music-making by women in a wide array of artistic styles. This year, The Rhythm Method will also be releasing records of music by two of its members, Leah Asher and Meaghan Burke, as well as Dai Fujikura’s “Silence Seeking Solace.”