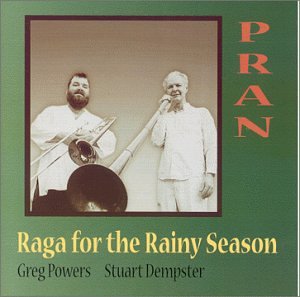 Pran, a world music duo, blends the trombone and didjeridu with the traditional north Indian musical style of Dhrupad. Greg Powers develops raga on trombone while world renowned Stuart Dempster provides the drone on his big beautiful brass didjeridu. Pran is the vital breath that enlivens us all and best describes their enchanting mystical sound. Two Americans fusing European and Australian Aboriginal instruments in the tradition of Asian Indian Dhrupad music. Sonorous, droning, raga-sounding pieces that unfold gracefully, as if they had all the time in the world.

David Gamper  (1945-2011) moved freely among the worlds of music performance, improvisation, and electronic instrument design. These passions merged into performer controlled sound processing environments he created for acoustic improvising musicians. He was a member of Deep Listening Band (with Pauline Oliveros and Stuart Dempster) since 1990. He appears on many recordings with Deep Listening Band and others, and performed world-wide. Gamperʼs solo piece Conch was in the Whitney Museum of American Artʼs BitStreams exhibition and is on the CD of sound art from that show.

In addition to his long time work with the Deep Listening Band, David collaborated with his wife Gisela Gamper with a project entitled See Hear Now, a real-time music and video collaboration that merged the sonic and the visible, and transported the performers and audience to a transcendent experience. The sounds were expanded through live electronic transformations and spatial diffusions, retaining the power of natural sound; and were paired to Giselaʼs videos and imagery. David Gamper performed at Roulette numerous times, with Deep Listening Band and with Gisela for See Hear Now. —Bio as of 2019