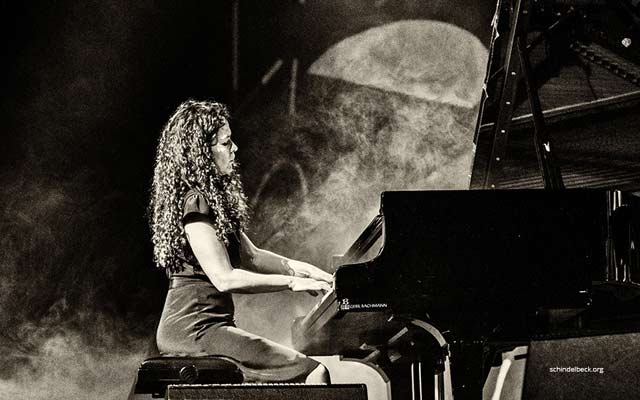 Composer/pianist , Sylvie Courvoisier was born and raised in Lausanne, Switzerland.
She moved to Brooklyn, New York in 1998, where she currently resides .

Her latest releases as a leader are: “ABATON” with Mark Feldman and Erik Friedlander on ECM Records (2004), “LONELYVILLE” with her new quintet on Intakt Records (2007)
and a solo piano album ,SIGNS AND EPIGRAMS ,on Tzadik Records (2007).
Her lastest release as a coleader are ” As soon as Possible”, a trio with Ellery Eskelin and Vincent Courtois on Cam Jazz ( 2008) and “Every so Often” duo with Ellery Eskelin on Prime Source( 2008).
Sylvie is currently the leader of her own quintet “Lonelyville” and the Trio “Abaton”.
She is a member of “Mephista”, an improvising trio with Ikue Mori and Susie Ibarra;” Herb Robertson Quintet”, ” Agra Dharma” with Makigami Koichi and Ikue Mori, Lotte Anker’s Trio, new 4tet with Gerry Hemingway, Mark Feldman and Thomas Morgan…
Since 1997, she also performs regularly in Duo with violonist Mark Feldman and in solo.

After playing cello for seven years, he turned to the double bass at the age of fourteen, taking lessons from Todd Sickafoose for a brief time and Cindy Browne Rosefield for the rest of his high school years. In 1999 he moved to New York to study with Harvie S and Garry Dial at the Manhattan School of Music, also taking extracurricular lessons with Ray Brown and Peter Herbert.

Ben Perowsky
Born and raised in New York City.
One of the most accomplished drummers of his generation, Ben Perowsky’s notable career has placed him among a small vanguard of
players able to move between jazz, experimental music and cutting edge pop and rock. Ben began his early performing life with jazz legend
James Moody, pop songstress Rickie Lee Jones and R&B star Roy Ayers.

Among the more than 70 recordings in his discography he has played on 10 different recordings for John Zorn’s TZADIK .He has also released six records as a leader to date. He currently leads 2 projects.
One a quartet with Chris Speed, Ted Reichman and Drew Gress. The other an ensemble called Moodswing Orchestra with eight musicians and 3 guest vocalists.
In the Spring of 2009 The Ben Perowsky Quartet: Chris Speed, Ted Reichman and Drew Gressreleased a CD entitled Esopus Opus featuring Ben’s latest compositionsand arrangements on Skirl records.