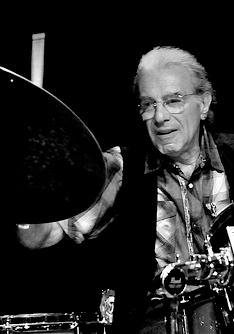 Born in the south Bronx on the 6th of January 1943, drummer-composer Barry Altschul was quickly ensconced in the hard bop scene of the late 50ies and 60ies. But it was a gig with pianist Paul Bley’s trio that put him amongst the ranks in the New York’s burgeoning free jazz scene of the next decade. This resulted in world tours and recordings
with such notables as Steve Swallow, Gary Peacock, the Jazz Composers’ Guild Orchestra, Steve Lacy, Roswell Rudd, and many others. At the end of the 60ies he played in the Cooperative Band Circle with Chick Corea, Anthony Braxton and Dave Holland as well as with the Sam Rivers Trio with Dave Holland and with the Anthony Braxton quartet with Holland, Georges Lewis or Kenny Wheeler. His familiarity with the tradition also landed him work with the likes of Hampton Hawes, Sonny Criss, Lee Konitz, Art Pepper, Kenny Drew, Tony Scott, Johnny Griffin, Babs Gonzalez, and many others. In addition to this, he led his own free bop groups, with such luminaries as Muhal, Richard Abrams, Anthony Davis, Ray Anderson, Mark Helias, Santi Di Briano, and Uri Caine, to name a few. During a 10-year sojourn in Paris, France he was chosen to be the first foreign artistic director of the French regional big band of Nancy where he conducted as well as composed music for a 20-piece orchestra with arrangements written by his friend, the great Colderage Taylor Perkinson. During that time, he also toured Africa, the Middle East and Eastern Europe as a cultural ambassador for the USIS. Returning to the US in 1993, he worked as a professor at Sarah Lawrence College, freelanced around New York, and played with a Dave Douglas project where he renewed his relationship with Roswell Rudd. Today, as well as performing with Roswell Rudd’s Trombone Tribe, he was also part of the F.A.B. Trio (Joe Fonda, Barry Altschul and Billy Bang), the Swell-Ullman band and of many projects under his own leadership. Barry has participated in over a 160 recordings, 10 of which under his own leadership. He has studied with Charli Persip, Sam Ulano and Lee Konitz. When asked how his music is best described, he quotes the late great drummer Beaver Harris: “from Rag Time to no time”. His performances have taken him all over the world, playing in major concerts, festivals, nightclubs, and on the radio and television. For the last few years Barry has been performing with Jon Irabagon in duo and trio settings.