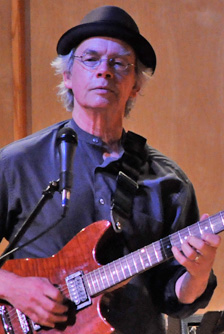 The 17-piece Bill Horvitz Expanded Band will perform music from it’s new CD, The Long Walk, a suite of pieces composed as a tribute to Bill’s brother Philip Horvitz, who passed away of heart failure in 2005 at the age of 44. The music includes a wide range of styles drawing on jazz, funk, folk, and new music. The compositions are tightly composed and arranged and contain sections of improvisation. Each piece relates in some way to a part of Philip’s life.

The Bill Horvitz Expanded Band is:

Bill Horvitz has been composing, performing, collaborating, and recording in a wide range of styles for nearly 40 years. He has composed works for solo guitar and ensembles ranging in size from duo to big band. His long and varied experience has resulted in an innovative and original compositional voice that has been described as “meditative, sizzling, earthy, funky, joyous, brooding, gorgeous, serene, and kinetically charged.” Over the years, he has collaborated with a long list of composers and musicians both in New York City and the San Francisco Bay Area and has composed music for theater, film, dance, spoken word, and art installation. In NYC he led and recorded with the Bill Horvitz Ensemble, an 11-member band featuring, among others, George Cartwright, Vincent Chancey, Bobby Previte, Jason Hwang, David Hofstra, Elliott Sharp, Myra Melford, and Herb Robertson, and played in a trio with Butch Morris and JA Deane. Horvitz played in the New Wave band The Public Servants and led the quartet Living With Apparaitions. In addition, he was a member of Butch Morris’ conduction ensembles in the 1980s and 1990s, appearing on three of Morris’ recordings. He also performed and recorded with John Zorn. In the Bay Area between 1993 and 2007 he led The Bill Horvitz Band with Steve Adams on sax/flute and Joseph Sabella or Harris Eisenstadt on drums. They recorded two CDs, Dust Devil and The Disappearance. Additionally, Horvitz has worked and recorded with Out By Five and Harris Eisenstadt’s Ahimsa Orchestra. He has recorded two solo guitar CDs, one electric and one acoustic. Since 2004, Horvitz has sung and played guitar, banjo, and ukulele in the duo TONE BENT with his wife, composer, musician, and singer Robin Eschner. He currently leads the instrumental trio, The Skerries, with Scott Walton, bass and Tom Hayashi, drums. As well, Horvitz is one of nine members in the Sonoma County band, Take Jack, a vocal and instrumental group that performs original songs and arrangements.