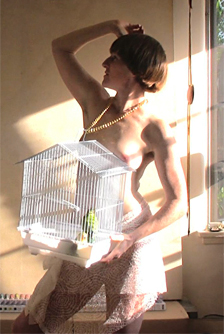 The Filmballad of MAMADADA is a collectively-authored experimental biodrama about the early 20th Century artist Baroness Elsa von Freytag-Loringhoven. A sculptor, poet, painter, public provocateur, and proto-performance artist, Freytag-Loringhoven made critical interventions in the development of artistic modernism. Yet, like many other women who carried out aesthetic and social movements of that time, her contributions have been largely excluded from history. The Filmballad of MAMADADA is a response this absence.

Lily Benson and Cassandra Guan initiated this project in 2012, seeking to revisit the amorphous legacy of feminism from a variety of  contemporary viewpoints. They recruited a group of over fifty filmmakers and artists worldwide to adapt fragments from Freytag-Loringhoven’s biography, asking each participant to interpret and represent on their own terms. Forty-nine individual passages were eventually completed and assembled together into a feature-length film.   Like a game of exquisite corpse unfolding in time, the production process gave shape to a conflicted picture of desires and fears surrounding identity politics today. The many voices contend with one another, but ultimately proclaim a shared desire to participate in a renewed, collective narrative.

Benson and Guan are currently raising funds to help with the final stages of finishing the film.
Visit their Kickstarter to see how you can help.