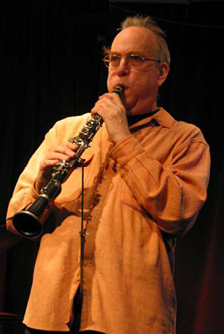 First, the Orchestra presents Daniel Goode’s Clarinet Songs, which includes choreography and dancing by Jody Oberfelder with three members of her company, and concludes with Clarinet Baby, a rousing finale that will feature the musicians wandering throughout the concert hall and into the audience. Additionally, David Krakauer is set to  have the audience dancing in the aisles with amazing solo turns in his Klezmer Set. David Mahler’s Takes on a Song for voice and orchestra, featuring singer Julie Hanify, applying sonic lenses, filters, editing, and special effects to a musical letter written to his wife. Rounding out Year Two of the Flexible Orchestra’s Clarinet Madness is Doina Rotaru’s Metabole III for five clarinets.

The Flexible Orchestra, founded by Daniel Goode in 2004, has been noted in The New Yorker’s “Talk of the Town” section and has been featured in the “Critic’s Pick” in Time Out New York. The Orchestra, as its name suggests, maintains its mission of flexibility, making an ensemble of about fifteen sound like a full symphony orchestra by means of strategic instrumentation. From one larger section of the same family of instruments (12 cellos, or 10 trombones, or 11 flutes, or 7 accordions, or 10 clarinets) to a smaller selection of instruments for variety and spice (a flute, clarinet, trombone; or a viola and harpsichord; or violin, cello, bass, percussion; or electric guitar, bass, and harp). That’s the idea, and flexibly, we change the orchestration every two years!

Daniel Goode is an American composer and clarinetist. He studied philosophy, and then music with Henry Cowell, Otto Luening, Pauline Oliveros, and Kenneth Gaburo. Goode’s works show influence from several sources, including bird song, Cape Breton fiddling, drone, Indonesian gamelan music, and minimal music (specifically music as a gradual process). Goode served as Director of the Electronic Music Studio of Rutgers University from 1971 to 1998 and is co-director of the DownTown Ensemble which he co-founded in New York in 1983. Since 1976, Goode has been a member of Gamelan Son of Lion, a Javanese-style iron gamelan ensemble dedicated to new music, for which he has composed many works. He has developed a special keyless clarinet made from a length of plastic pipe that allows him to play in the Indonesian slendro tuning system, which he plays with the group on occasion. His most recent project is the Flexible Orchestra, a reform of the Western orchestra inspired to some degree by his experience with the gamelan as a musical, social, and cultural phenomenon. His works are published by Frog Peak Music and Theodore Presser.
danielgoode.com