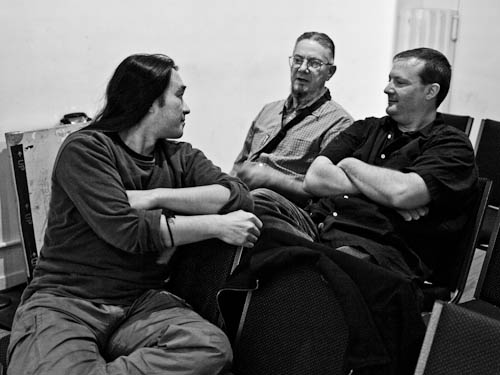 The Hassay-DeChellis-Nakatani Trio at Roulette 2009

“An Evening of Spontaneous Beauty”

The Hassay-DeChellis-Nakatani Trio perform purely improvised music that draws from everything and nothing all at the same time. They each have very distinct voices and styles, yet allow each other to wrestle themselves into unfamiliar territory creating spontaneous works of music that excite and inspire any audience. They are intense and bombastic at once and suddenly hushed and delicate the next. Their years of collective improvising experience has allowed them to develop the ability to ‘turn on a dime’ at any given moment. This is a concert that should be experienced with open minds and open ears.

Dan DeChellis (pianist) first came to the attention of the jazz / improvised / new music world in 1996 with the release of his solo recording debut “Shapes” on the Sachimay label. This recording earned him immediate critical praise and led to appearances throughout the Northeast. Since then DeChellis has released five more CDs on Sachimay and has continued to increase his reputation as one of today’s busiest and most compelling improvisers. He has performed as a soloist, leader and sideman at the Musiffest (PA), Roulette (NY), Knitting Factory (NY), The Middle East (Boston), Sculler’s Jazz Club (Boston), Harvard University, New Langton Arts (CA), The Zeitgeist, ABC NO Rio, Autumn Uprising Festival, the Big Sur Experimental Music Festival and as an organizer and performer at New York’s, Improvised and Otherwise Festival.

Gary Hassay (alto saxophone) has been performing since 1979 with various groups, both as a leader and a sideman. His large ensemble, “Dr. Vincent Sakeeda’s Attack Ensemble”, founded in 1979, was a tour de force of free music which drew critical and public attention. Beginning in 1985, interdisciplinary collaborations have become the main interest of Mr. Hassay. Working in partnership with choreographer Karen Carlson has produced more than thirty-seven performance scores (musician/dancer ) in nine years. “The Stubborn Trio” (GH/KC/action painter Howard Greenberg) performed together for over four years. An inter-active computer environment installation (Scott Sherk, George Shortess, G.H., K.C.) occurred in 1997. “The New Lounge”, is the name of one of Hassay’s current musical projects (as,dm,gui). A solo cd project entitled “A Survivor’s Smile” was released on the Dbops Music label in November, 1996. In 1999 “Another Shining Path” was released on Drimala Records and received qualifications for Grammy awards in four categories. Dbops Music released a limited edition cd (alto sax/violin) entitled “Dbops Pollittics” in June, 2001. In March, 2002 Drimala Records released a duo cd “Blackwater Bridge” featuring harpist Anne LeBaron. Blackwater Bridge made the Grammy ballot in two different jazz instrumental categories, and has almost completely sold out. In late 2004 the new cd titled “Tribute To Paradise” with Gary Hassay and Ellen Christi was released on Drimala Records. “Tribute” is Gary Hassay’s debut as a Tibetan style throat singer, and the disc is selling well while receiving great reviews.

Tatsuya Nakatani (percussion) is originally from Osaka, Japan. In 2006 he performed in 80 cities in 7 countries and collaborated with 163 artists worldwide. In the past 10 years he has released nearly 50 recordings on CD.

He has created his own instrumentation, effectively inventing many instruments and extended techniques. He utilizes drumset, bowed gongs, cymbals, singing bowls, metal objects, bells, and various sticks and bows to create an intense, organic music that defies category or genre. His music is based in improvised/ experimental music, jazz, free jazz, rock, and noise, yet retains the sense of space and beauty found in traditional Japanese folk music.

In addition to live solo and ensemble performances he works as a sound designer for film and television. He also teaches Masterclasses and Workshops at the University level. He also heads H&H Production, an independent record label and recording studio based in Easton, Pennsylvania. He was selected as a performing artist for the Pennsylvania Performing Artist on Tour (PennPat) roster as well as a Bronx Arts Council Individual Artist grant.