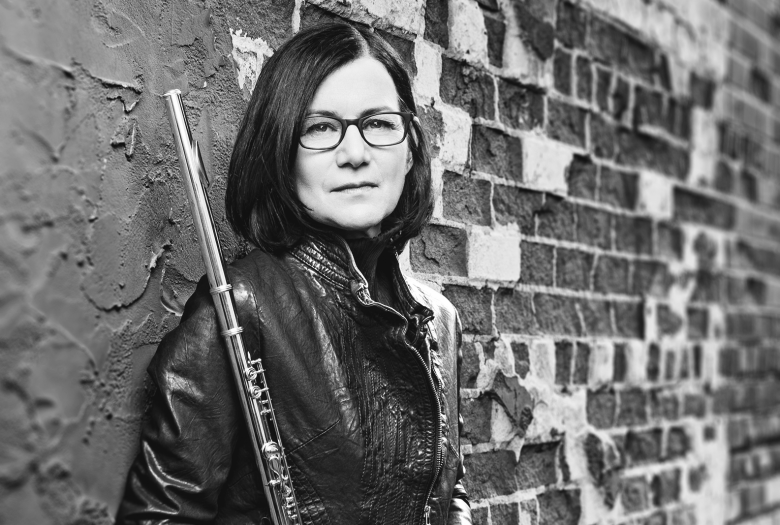 New York-based flutist/composer and 2014 Guggenheim Fellow Jamie Baum is proud to announce the release of The Jamie Baum Septet+, Bridges on Sunnyside Records. The highly anticipated follow-up to her wildly successful 2013 recording In This Life, Bridges offers a recording of incredible depth, beauty, spirituality, undiluted zeal and is the culmination of Baum’s search for common links between some of the world’s great religious music traditions. Hailed by Downbeat for her “remarkable artistic facility” and by The New York Times for her “remarkable balance of fluidity and restless creativity,” Baum’s advanced harmonic sensibility and sonic imagination—beautifully brought to life by the stellar members of her long-running ensemble—proves yet again the capacity of modern jazz to absorb and transform music of diverse traditions, without sacrificing the improvisatory element at the core of its identity.

In her album notes Baum cites Wikipedia’s definition of the word “bridge,” one that seems to sum up her artistic mission here: “a structure built to span physical obstacles without closing the way underneath.” At the same time, Baum’s musical wanderings highlight something even deeper: our shared humanity, and the common threads that run throughout our history. With great respect for these varied traditions and their vast languages, Baum’s goal was not to play or compose exactly in these styles but to have her travels and playing experiences inspire new ways of writing and improvising in a decisively modern jazz format. The diverse musicians who make up the Jamie Baum Septet+ are all first-call artists on the jazz scene, many of them accomplished leaders in their own right.

The Jamie Baum Septet+, formed in 1999, has been performing with this current line-up of musicians since 2010. For almost 20 years Baum has created opportunities to perform her compositions with this ensemble, developing a unique voice with the colors and textures of this unusual instrumentation. Including the recently released Bridges for Sunnyside Records, their four CDs have received stellar reviews in all relevant publication including the New York Times and NPR’s “All Things Considered”, with most receiving four stars in DownBeat. Nominated by the Jazz Journalists Association, for “Best Midsize Ensemble of 2014”, they have done several tours in the US and abroad at notable venues and festivals.

NYC flutist/composer/recording artist/clinician, Jamie Baum, has toured the US and over 30 countries and has performed with artists as renowned and diverse as George Russell, Randy Brecker, Donald Brown, Mick Goodrick, Tom Harrell and Kenny Barron to Dave Douglas, Fred Hersch, Uri Caine, Ralph Alessi, Leni Stern, David Binney, Jane Bunnett, V.M Bhatt, Graham Haynes, Anthony Braxton and Wadada Leo Smith. Though focusing primarily on jazz, she has studied and performed classical, new music, Brazilian and Latin music. Receiving critical praise for six CD’s as a leader, Sight Unheard (w/Dave Douglas, Kenny Werner), Moving Forward, Standing Still (w/Ralph Alessi, George Colligan), In This Life and Bridges (w/Amir ElSaffar, John Escreet) all made several “Best CDs of the Year” lists with four stars from DownBeat. Inch By Inch, by the cooperative band Yard Byard: The Jaki Byard Project (w/Jerome Harris, George Schuller), out May, 2014 (GM Recordings) also received four stars from DownBeat. Recordings as sidewoman include those by Dave Binney, George Colligan, Ursel Schlicht, Frank Carlberg, Taylor Haskins, Steve Lampert, Monika Herzig, Brian Landrus, etc. Ms. Baum has been listed in the DownBeat Critics Polls annually since 1998, was included in the Huffington Post’s “Twenty five Great Jazz Flute Performances”, has appeared in both the JazzTimes and NPR Critics Polls and was nominated by the Jazz Journalists Association for “Flutist of the Year” nine times. Among the many awards for her composing, Baum was awarded a 2018 USArtist International grant, a 2017 New Music USA Project Grant, a 2014 Guggenheim Foundation Fellowship and was selected a 2014-15 Norman Stevens Fellow during her MacDowell Colony residency. She won the ’99 International Jazz Composers Alliance Award, the 2010 CAP Award (American Music Center), the 2003 New Works: Creation and Presentation Award and the 2007 Encore Award, both components of the Doris Duke/Chamber Music America Jazz Ensembles Project. Through a highly competitive auditioning process, Jamie was chosen to tour for the DOS/Kennedy Center Jazz Ambassador program from ’99-’03 as well as several later tours sponsored by the US State Department in South America, Europe, South Asia. In addition to leading her Septet+, Short Stories, and co-leading Yard Byard: The Jaki Byard Project, she is involved in several other projects either as co-leader or side-woman including The Richie Beirach/Jamie Baum Duo. Ms. Baum has been on the faculty at Manhattan School of Music since ’07 (where she received her MM in jazz composition), an adjunct faculty at the New School University since ’04, and taught at Berklee College of Music (2011-2013). A clinician for Altus Flutes/KHS America, they’ve sponsored her innovative, pioneering workshop “A Fear Free Approach to Improvisation for the Classically-Trained Musician”TM worldwide since 1993.

This recording was made possible with the very generous support from the John Simon Guggenheim Memorial Foundation. This Jamie Baum Septet+ Project was supported by New Music USA, made possible by annual program support and/or endowment gifts from Mary Flagler Cary Charitable Trust, New York City Department of Cultural Affairs, Helen F. Whitaker Fund, Aaron Copland Fun for Music, Carl Jacobs Foundation, New York State Council of the Arts. Song Without Words and Joyous Lament were composed while attending a residency at the MacDowell Colony in Peterborough, New Hampshire, as a 2014-15 Norman Stevens Fellow. UCross Me was composed while attending a residency at the UCross Foundation in Clearmont, Wyoming in March 2015. Honoring Nepal: The Shiva Suite, was commissioned by The Rubin Museum of Himalayan Art as part of their performance series.