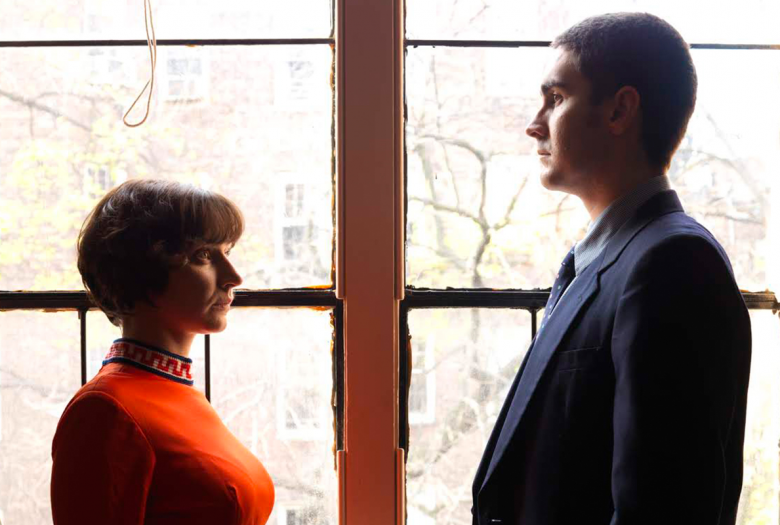 In May 2018 the contemporary music community of New York City lost one of its shining stars and most beloved members, composer Matt Marks.  In 2017, the PROTOTYPE Festival premiered Matt’s opera (with librettist and director Paul Peers), Mata Hari, to great success.  As we all wrestle with this seismic loss, PROTOTYPE and Roulette pay tribute to Matt by showcasing his first music-theatre composition, The Little Death: Vol. 1, in which he performed the male lead originally.

The Little Death: Vol. 1 fuses bombastic electro-pop hooks, frenetically chopped break beats, hypnotic lyrics, and apocalyptic Christian imagery. Holding these disparate elements together is an unconventional narrative that follows two characters, Boy (Ted Hearne) and Girl (Mellissa Hughes), on a journey through the world of Fundamentalist Evangelism, as they cope with repressed sexuality in a modern world. The Little Death: Vol. 1 was one of Time Out NY’s Top Ten Classical albums of 2010 and “I Don’t Have Any Fun” was listed as one of Huffington Post’s Top Ten Alternative Art Songs of the Decade alongside works by Sufjan Stevens, Sigur Ros, and Joanna Newsom.

Matt Marks (1980 – 2018) (Composer) was a composer/performer of innovative opera and music-theater works, as well as unique and exciting instrumental and electronic music. A founding member of Alarm Will Sound, he performed as a French hornist, vocalist, and keyboardist with such acclaimed new music ensembles as the International Contemporary Ensemble (ICE), Signal, and ACME. He recorded for Warp Records, Nonesuch, Cantaloupe Music, as well as many other independent labels. He had also performed as a soloist with the LA Philharmonic and live on This American Life at BAM. As a composer and arranger, Matt’s work has been called “staggeringly creative” by The New York Times, “obsessively detailed” by New York Magazine, and “stunning” by the Pittsburgh Post-Gazette and has been performed at Carnegie Hall, Walt Disney Concert Hall, Lincoln Center, The Barbican Center, The Bang on a Can Marathon, and live on WNYC radio. Matt’s first album, his post-Christian nihilist pop opera, The Little Death: Vol. 1, released on New Amsterdam Records, was described as “cheerily seductive” by the NY Times and “unabashedly boppy, baroquely multireferential, then suddenly sentimental” by Time Out NY. TLDV1 was also one of Time Out NY’s Top Ten Classical albums of 2010 and it contained one of Huffington Post’s Top Ten Alternative Art Songs of the Decade. Other recent projects included his mini-opera Strip Mall for the L.A. Philharmonic, a sold-out run of his “pop horror fashion show” The House of Von Macramé at the Bushwick Starr, his short operatic work Bluetooth Islands for the Brooklyn Philharmonic, a remix for Meredith Monk’s latest album, and a live realization of The Dirty Projectors’ album/opera The Getty Address. His opera Mata Hari was performed in the 2016 PROTOTYPE Festival in NYC, which received a NYSCA grant.

Mellissa Hughes (Performer). Hailed by The New York Times as “a versatile, charismatic soprano endowed with brilliant technique and superlative stage instincts…indispensable to New York’s new-music ecosystem,” Mellissa Hughes enjoys a busy international career in contemporary and early music. A dedicated interpreter of living composers, Hughes has worked closely with Steve Reich, Neil Rolnick, and premiered works by David T. Little, Ted Hearne, Caleb Burhans, Christopher Cerrone, Jacob Cooper, and Frederic Rzewski, among others. Recent highlights include Chicago Symphony “Beyond the Score” performances celebrating Pierre Boulez; Ted Hearne’s The Source at BAM; a solo American Songbook recital at Lincoln Center; an acclaimed recording of Jacob Cooper’s Silver Threads from Nonesuch Records; international tours with John Zorn; a Bang on a Can All-Stars performance of David Lang’s Death Speaks in Paris; and more. In the classical concert hall she has performed Mozart’s Vespers and Requiem with Sir Neville Marriner, Bach cantatas with Julian Wachner and the Choir of Trinity Wall Street, and Dido under the direction of Andrew Lawrence King. Equally at home in front of a rock band, Hughes has received widespread acclaim in her role as lead vocalist of Newspeak, an amplified alt-classical band, and for her work with Missy Mazzoli’s Victoire. Based in Brooklyn, Mellissa Hughes holds degrees from Westminster Choir College and Yale University.

Ted Hearne (Performer) is a Los Angeles-based composer, singer and bandleader noted for his “voracious curiosity” (NewMusicBox), “tough edge and wildness of spirit,” and “fresh and muscular” music (The New York Times), who “writes with…technical assurance and imaginative scope” (San Francisco Chronicle). The New York Times included The Source on its list of the best classical vocal performances of 2014, and (along with The New Yorker and The Nation) of the best albums of 2015. Law of Mosaics, Hearne’s 30-minute piece for string orchestra, was recently performed by the Chicago Symphony Orchestra and San Francisco Symphony, and was named one of The New Yorker’s most notable albums of 2014 by Alex Ross. Hearne performs with Philip White as the vocal-electronics duo R WE WHO R WE, belongs to the composer collective Sleeping Giant, and his most recent collaboration paired him with legendary musician Erykah Badu. An active recording artist, his albums Katrina Ballads, The Source and Outlanders are available on New Amsterdam Records. Sound From the Bench, his 40-minute cantata challenging the Supreme Court’s Citizens United ruling, was recently released by Cantaloupe Music along with three other works performed by Donald Nally and The Crossing. Ted Hearne is the recipient of the Gaudeamus Prize and the New Voices Residency from Boosey and Hawkes. He recently joined the composition faculty at the University of Southern California. Recent and upcoming works include commissions from the LA Philharmonic, eighth blackbird, A Far Cry, Ensemble dal Niente, and Roomful of Teeth.

This performance is a co-production between Roulette and the PROTOTYPE Festival.