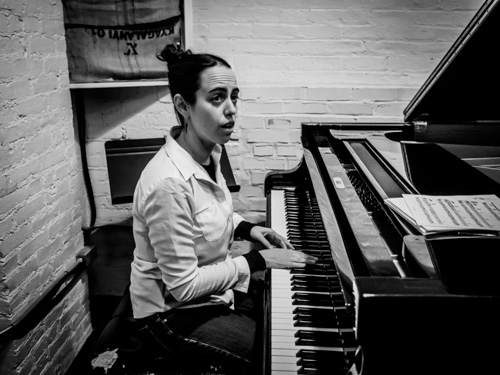 The Mara Rosenbloom Quartet has been performing together as a unit for 2 solid years. Tonight will mark the official showcase of their debut release School of Fish, featuring the original music of Mara Rosenbloom. The music is a celebration of community and human interaction – how we forge unspoken bonds, react, drift apart, and out of inherent need, find each other again. “Lyrically contemplative and rhythmically pulsating”¦this quartet plays music that renders believable a future for jazz.” All About Jazz.

Mara Rosenbloom grew up in Madison, Wisconsin discovering music at an early age, finding her voice walking alone in the tall grass of Wisconsin’s prairie land, dancing on the piers, and listening with consistently open ears. Inherently drawn to the piano, both Mara’s playing as well as her compositions have been described by many as organic, honest, and lyrical.

Throughout her years in New York City, Mara has studied and performed alongside a diverse group of musicians including Kenny Werner, Ralph Alessi, Jim McNeely, Gil Goldstein, Robert Dick, Ursel Schlict, James Carney, and Dr. Justin Dello Joio. Currently, Mara performs consistently with her own quartet, featuring Darius Jones, Isaac Jaffe, and Nick Anderson, and recently released her debut album as a leader, School of Fish. Mara’s works for large ensemble have been premiered at the Blue Note Jazz Club NY, as well as showcased and conducted by Jim McNeely. In addition to her own music, Mara also has a constantly growing interest in Afro-Peruvian music, and has arranged for and performed with Internationally acclaimed Peruvian singer Eva Ayllon, and the Gabriel Alegria Afro-Peruvian Sextet.